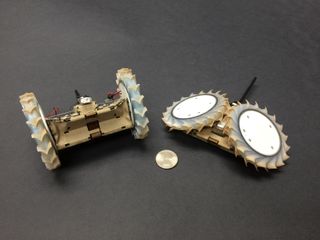 NASA’s Pop-Up Flat Folding Explorer Robot (PUFFER) was inspired by an origami design. This little robot could be used as a scout for larger rovers, going places that would be risky or hard to reach.
(Image: © NASA/JPL-Caltech )

Future NASA robots exploring Mars and other alien worlds may be even more productive, thanks to a pocketful of tagalong minirovers.

NASA engineers are developing the Pop-Up Flat Folding Explorer Robot (PUFFER), a lightweight, origami-inspired bot capable of flattening itself out, squeezing into tight spots and clambering up steep slopes. (You can see the PUFFER in action in this video.)

"They can do parallel science with a rover, so you can increase the amount you're doing in a day," Jaakko Karras, PUFFER's project manager at NASA's Jet Propulsion Laboratory (JPL) in Pasadena, California, said in a statement. "We can see these being used in hard-to-reach locations — squeezing under ledges, for example."

Karras came up with the basic idea behind PUFFER's body while experimenting with origami designs, NASA officials said. He and his colleagues swapped out paper in favor of printed circuit boards like those in ordinary smartphones.

"The circuit board includes both the electronics and the body, which allows it to be a lot more compact," PUFFER team member Christine Fuller, a mechanical engineer at JPL, said in the same statement. "There are no mounting fasteners or other parts to deal with. Everything is integrated to begin with."

PUFFER originally had four wheels, but the design evolved into a two-wheel variant whose wheels could be folded over the body, allowing the little rover to crawl as well as roll. PUFFER also features a tail for stability, a high-resolution "microimager" camera and solar panels on its belly. (PUFFER can flip over when its batteries need a recharge.)

The project team has already built a PUFFER prototype and put it to the test. Over the past 18 months, NASA officials said, PUFFER has performed field tests in Big Bear, California; a ski resort in Grand Junction, Colorado; and on Antarctica's Mount Erebus, the southernmost active volcano on Earth.

PUFFER isn't ready to fly just yet, the officials said. The team's planned next steps include incorporating scientific instruments, such as gear that can identify carbon-containing organic molecules, and giving the robot more autonomy. (PUFFER can currently be controlled remotely via Bluetooth.)

The robot will also probably get bigger before it's ready to blast off. Future planetary-exploration versions may be about the size of a bread box, NASA officials said.

"Small robotic explorers like PUFFER could change the way we do science on Mars," Karras said. "Like [the small Mars rover] Sojourner before it, we think it's an exciting advance in robotic design."