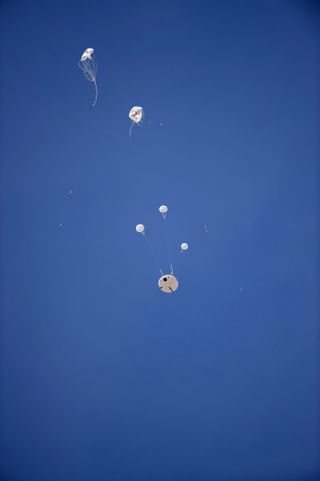 The two drogue parachutes begin the slowing. With the proving of Orion's parachute system, NASA hopes to send two astronauts for a flight in 2019.
(Image: © NASA)

Wednesday's trial run was the second of eight drops that are designed to test the parachute system in various scenarios. This test simulated an abort sequence, which might occur if something went wrong with the rocket launching an Orion spacecraft into space, and the capsule needed to be ejected.

Above the U.S. Army's Yuma Proving Ground in Arizona, a model of Orion was dropped from a C-17 aircraft flying at an altitude of 25,000 feet, according to a statement from NASA. The drop took place at 9:45 a.m. local time (11:45 a.m. EST/1645 GMT), about 2 hours later than scheduled, and lasted about 4 minutes, a NASA representative told Space.com. [NASA's Orion Space Capsule Parachute in Photos]

Video footage of the capsule shows it hurtling toward the ground at a terrifying speed, trailed by two gray drogue parachutes. Once the candy-cane-striped main parachutes open, the capsule slows down significantly. The craft hits the ground on its side, rather than directly onto its flat bottom, and some material appear to break off the side.

"This was a very successful test for the team demonstrating the parachute performance for an ascent abort mode, critical to the safety of the crew for a safe landing," a NASA representative told Space.com in an email.

During this kind of test, the Orion model travels at the relatively slow speed of about 130 mph (210 km/h); during re-entry from space, the capsule may reach speeds of about 310 mph (500 km/h), according to NASA. The parachute system can slow the space capsule to just 20 mph (32 km/h). Orion has a total of 11 parachutes, in four groups; only two of the parachute groups were deployed during Wednesday's test: the two drogue parachutes and the three main parachutes.

Orion is NASA's new spacecraft for ferrying humans to deep-space destinations. Unlike the space shuttle, which was designed to glide back down to Earth after a trip to space, Orion relies on a parachute system to lower it back to Earth. Orion has undergone one uncrewed test flight and is scheduled for a second uncrewed flight in 2019; but NASA is but NASA is now investigating the possibility of moving directly into a crewed flight.