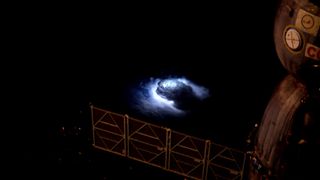 While European Space Agency astronaut Andreas Mogensen was aboard the International Space Station in 2015, he studied strange electrical discharges that appear over thunderstorms.
(Image: © ESA/NASA)

In views from the International Space Station, a mysterious set of electrical discharges shine above a roiling thunderstorm in Earth's upper atmosphere.

Andreas Mogensen, a European Space Agency (ESA) astronaut who flew in 2015, took pictures over thunderstorms to try to see the strange atmospheric features, which are sometimes called red sprites, blue jets, pixies and elves. The work was recently published by Denmark's National Space Institute, and Mogensen's footage is spotlighted in an ESA video.

"It is not every day that you get to capture a new weather phenomenon on film, so I am very pleased with the result — but even more so that researchers will be able to investigate these intriguing thunderstorms in more detail soon," Mogensen said in a statement.

Mogensen focused on cloud turrets, or pillars of cloud that extend into the upper atmosphere, to pinpoint the blue flashes. He documented 245 blue flashes during a 160-second video of a thunderstorm above the Bay of Bengal.

Satellites orbiting Earth are poorly placed to look at these storms because their high viewing angle doesn't show the scale of the blue jets, especially for smaller discharges, ESA officials stated. The space station, by contrast, is in a low-Earth orbit and is a better platform for capturing these transient phenomena.

"The blue discharges and jets are examples of a little-understood part of our atmosphere," ESA officials said in the statement. "Electrical storms reach into the stratosphere and have implications for how our atmosphere protects us from radiation."

Researchers will be able to follow up on the work using the Atmosphere-Space Interactions Monitor, an instrument suite slated to launch to the space station later this year. It will be installed outside the station's Columbus laboratory to look at thunderstorms and their "transient luminous events," ESA officials said.

The results were detailed in January in the journal Geophysical Research Letters.