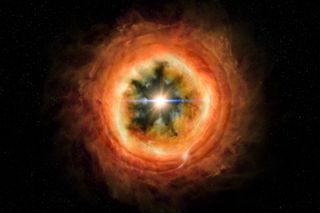 A new study of ancient meteorites gave researchers insight into the lifetime of the disk of gas and dust, called the solar nebula, that eventually formed the solar system.
(Image: © IT/JHUAPL)

Astronomers have established a new timeline for the solar system that is helping to pinpoint when gas giants Jupiter and Saturn likely formed.

Approximately 4.6 billion years ago, a swirling cloud of hydrogen gas and dust known as the solar nebula collapsed in on itself, giving way to the birth of the sun. The leftover material from this massive explosion then clumped together to form the planets, in a process called core accretion.

A new study suggests Jupiter and Saturn likely took shape within the first 4 million years of the solar system's formation, which further supports the core accretion model, Benjamin Weiss, co-author of the study and professor of planetary sciences at the Massachusetts Institute of Technology (MIT), told Space.com. [Watch: Our Solar System Built to Scale in Nevada Desert]

Weiss and lead author Huapei Wang, a postdoctoral student at MIT, studied the magnetic orientations of four ancient meteorites called angrites. Rare today, they fell to Earth at different times and were found in Brazil, Argentina, Antarctica and the Saharan desert. This type of space rock acts as a good marker for what the cosmic environment was like during the early days of the solar system.

"When the solar nebula was present, it generated a substantial magnetic field," which would in turn be recorded in meteorites formed during this time, Weiss said. However, he added, the researchers observed little to no remnant magnetization in the oldest of the four angrites, which formed 3.8 million years. That lack of magnetization suggests the gas and debris of the solar nebula had already dissipated by that time, Weiss said — and thus, that the solar system's large-scale structure, including Jupiter and Saturn, must have already been established.

"Solar systems form out of the condensation of a gaseous nebula. We obtained an accurate and precise age for the lifetime of our solar system's ancient [solar] nebula and the magnetic field," Weiss told Space.com. "We found that the [solar] nebula and [magnetic] field had dispersed 3.8 million years after the formation of the solar system."

The study, published yesterday (Feb. 9) in the journal Science, offers a more precise estimate of the solar nebula's lifetime and will therefore help to determine when and how other planets formed in the solar system, the researchers said.

"Since the solar nebula lifetime critically affects the final positions of Jupiter and Saturn, it also affects the later formation of the Earth, our home, as well as the formation of other terrestrial planets," Wang said in a statement from MIT.

Going forward, the researchers said they plan to study other primitive asteroid samples to be collected by the Hayabusa 2 spacecraft and NASA's OSIRIS-REx mission, which are expected to return to Earth in the early 2020s.

"I plan to measure the magnetism of these returned materials, which may contain records of the [solar] nebula from times and locations around the sun different from what we have measured in meteorites," Weiss told Space.com.