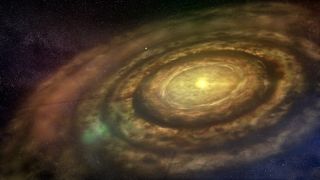 This illustration depicts a protoplanetary disc around a newborn star.
(Image: © University of Copenhagen/Lars Buchhave)

Astronomers have traced the growth of Earth's solar system back to its cosmic womb, before the sun and planets were born.

The solar system coalesced from a huge cloud of dust and gas that was isolated from the rest of the Milky Way galaxy for up to 30 million years before the sun's birth nearly 4.6 billion years ago, a new study published online today (Aug. 7) in the journal Science suggests. This cloud spawned perhaps tens of thousands of other stars as well, researchers said.

If further work confirms these findings, "we will have the proof that planetary systems can survive very well early interactions with many stellar siblings," said lead author Maria Lugaro, of Monash University in Australia. [Take Our Solar System Quiz]

"In general, becoming more intimate with the stellar nursery where the sun was born can help us [set] the sun within the context of the other billions of stars that are born in our galaxy, and the solar system within the context of the large family of extrasolar planetary systems that are currently being discovered," Lugaro told Space.com via email.

Radiometric dating of meteorites has given scientists a precise age for the solar system — 4.57 billion years, give or take a few hundred thousand years. (The sun formed first, and the planets then coalesced from the disk of leftover material orbiting our star.)

But Lugaro and her colleagues wanted to go back even further in time, to better understand how and when the solar system started taking shape.

This can be done by estimating the isotope abundances of certain radioactive elements known to be present throughout the Milky Way when the solar system was forming, and then comparing those abundances to the ones seen in ancient meteorites. (Isotopes are versions of an element that have different numbers of neutrons in their atomic nuclei.)

Because radioactive materials decay from one isotope to another at precise rates, this information allows researchers to determine when the cloud that formed the solar system segregated out from the greater galaxy — that is, when it ceased absorbing newly produced material from the interstellar medium.

Estimating radioisotope abudances throughout the Milky Way long ago is a tall order and involves complex computer modeling of how stars evolve, generate heavy elements in their interiors and eventually eject these materials into space, Lugaro said.

But she and her team made a key breakthrough, coming up with a better understanding of the nuclear structure of one radioisotope known as hafnium-181. This advance led the researchers to a much improved picture of how hafnium-182 — a different isotope whose abundances in the early solar system are well known — is created inside stars.

"I think our main advantage has been to be a team of experts in different fields: stellar astrophysics, nuclear physics, and meteoritic and planetary science so we have managed to exchange information effectively," Lugaro said.

The team's calculations suggest that the solar system's raw materials were isolated for a long time before the sun formed — perhaps as long as 30 million years.

"Considering that it took less than 100 million years for the terrestrial planets to form, this incubation time seems astonishingly long," Martin Bizzarro, of the University of Copenhagen in Denmark, wrote in an accompanying "Perspectives" piece in the same issue of Science.

Bizzarro, like Lugaro, thinks the new results could have application far beyond our neck of the cosmic woods.

"With the anticipated discovery of Earthlike planets in habitable zones, the development of a unified model for the formation and evolution of our solar system is timely," Bizarro wrote. "The study of Lugaro et al. nicely illustrates that the integration of astrophysics, astronomy and cosmochemistry is the quickest route toward this challenging goal."

The researchers plan to investigate other heavy radioactive elements to confirm and refine their timing estimates, Lugaro said.