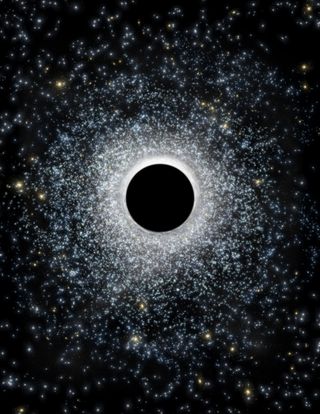 For decades, astronomers have tracked black holes with masses millions of times that of the sun, as well as those with tens of solar masses. But black holes between those two extremes have proved elusive. Now, astronomers studying a globular cluster have found just such a black hole at its center, showing that intermediate-mass black holes could be hiding out in these compact agglomerations of stars.

Lead study author Bülent Kiziltan, an astronomer at the Harvard-Smithsonian Center for Astrophysics (CfA), and his co-authors Holger Baumgardt (of Australia's University of Queensland) and Abraham Loeb (also of CfA) found a black hole between 1,400 and 3,700 solar masses at the center of 47 Tucanae, a globular cluster in the southern sky some 16,700 light-years from Earth.

Black holes are usually found because they emit massive amounts of X-rays as matter falls in. Midsize black-hole candidates have been found in galaxies; a group from the University of Maryland and NASA's Goddard Space Flight Center found one in another galaxy in 2015, and there are about a dozen objects in total. [The Strangest Black Holes in the Universe]

Kiziltan and his team found this one by measuring motions of pulsars within the cluster. They found the telltale signs of a compact, massive object in the cluster's heart. The likeliest explanation for the motions was a black hole.

"Intermediate-mass black holes have been expected [in globular clusters] for many decades," Kiziltan told Space.com. "But we've not been able to find one conclusively."

Theorists think stellar-mass black holes form from stars that are at least a few dozen times the mass of the sun. When they run out of nuclear fuel, there is no longer enough energy from radiation to hold the star's outer layers against its immense gravity. The star collapses, and then explodes as a supernova. (Supernovas can outshine the galaxies in which they reside.) What's left of the star then shrinks into a tiny volume. A 100-solar-mass star, as a black hole, would have a radius of about 180 miles (290 kilometers). The former star's escape velocity exceeds that of light, resulting in a black hole, from which nothing can escape.

A big question for astronomers is what the population of black holes looks like. Given that there are supermassive black holes, and stellar-mass ones, there should be a population of black holes with masses between those two. But there don't seem to be as many as expected. The centers of globular clusters, which are agglomerations of old stars, seemed a good place to look, as earlier studies indicated they might be there, according to the new study. [No Escape: Black Holes Explained (Infographic)]

The problem is, black holes are visible only when stuff falls in them. As such, the researchers needed another method that didn't depend on picking up radio emissions.

That's why Kiziltan and his colleagues decided to look at the pulsars that inhabit a globular cluster. Pulsars form from stars less massive than those that make black holes. After those stars go supernova, they collapse into neutron stars.

Some neutron stars spin rapidly and emit radio waves along a line offset from their rotational axes. These are called pulsars. Earthbound observers see them if Earth is in the radio beam as it sweeps across the sky. Pulsars' rotation rates change so little that they are precise timekeepers. They are precise enough that by timing the signal and looking for any Doppler shifts, it's possible to measure a pulsar's movement along one's line of sight.

Kiziltan's group tracked the movement of some two dozen pulsars and used computer simulations to model the cluster to track down their black-hole candidate.

"We're proposing a brand-new approach to the study of globular clusters," Kiziltan said. "It's not only that we see the dynamical signature of a black hole, but how to probe the region near it without going too close to it." Probing the centers of globular clusters is usually difficult, because the density of stars makes it hard to see what's going on.

"Globular clusters have small escape speeds," he said. "So the stars should blow away all the gas." There will be some as stars age, such as a red giant's stellar winds. "But that amount of gas is nowhere close enough to make an intermediate-mass black hole."

This differs from the supermassive black holes at galactic centers, he added, because one would expect lots of matter to accumulate there, feeding a black hole and allowing it to grow very fast.

Both Kiziltan and Cole said there are several ways to grow black holes early in a cluster's history. "One of my favorites is runaway collisions of stars or stellar- mass black holes," Miller said. "An interesting effect is, if you have a bunch of stars in a dense stellar region, the heaviest will start runaway collisions." Once a black hole forms — perhaps when a star that's absorbed a few neighbors dies ―  all the matter that isn't in a stable orbit around the black hole will fall in or get ejected from the cluster, he said. That puts an automatic stop on the black hole's growth.

For scientists to get a better handle on how such black holes might form in clusters, more of them need to be found — but that won't be easy, Kiziltan said. The only reason it worked for 47 Tucanae was that there were enough pulsars in it to begin with, and they were close enough to see. Not every globular cluster has the right combination of distance and bright pulsars.

The study appears in the journal Nature today (Feb. 8).