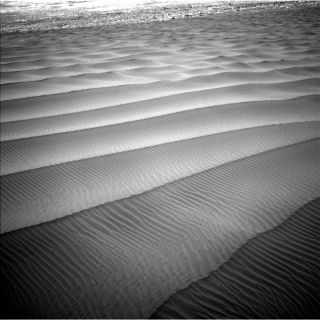 The Mars Curiosity rover captured this image of ripples in the sand on the Red Planet. The image was taken by the rover's Navcam on Feb. 6, 2017.
(Image: © NASA/JPL-Caltech )

Waves of sand on the parched surface of Mars, spotted by NASA's Curiosity rover, are reminiscent of ripples on the surface of a lake.

While there may have once been lakes, rivers and oceans on the surface of Mars, today the Red Planet is more parched than the driest deserts on Earth. (However, very salty liquid water is thought to exist in a few places on Mars.)

But new images from the Curiosity rover, released today (Feb. 6), show windswept stretches of sand that look like waves cresting on a body of water. The repeating ripples create a hypnotic pattern that stretches across the baked landscape.

Curiosity has been scuttling around on the surface of Mars since August of 2012. In that time, the little robot has explored beautiful and treacherous landscapes, and sent back images of all kinds of interesting surface features, including massive sand dunes and rocky outcrops.

The rover's primary mission is to evaluate whether Mars may have once had an environment that could support life. In Curiosity's first two years on the surface, the rover found ample evidence that Mars once supported large bodies of water, a necessary ingredient for life as we know it.