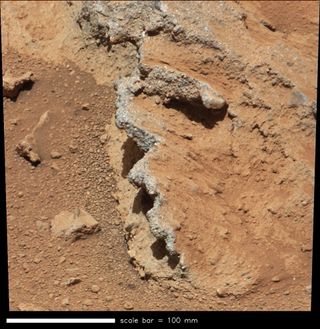 The Curiosity rover investigated an area on Mars named Hottah, which appears to be part of an ancient riverbed.
(Image: © Malin Space Science Systems)

LONDON — Water, water everywhere, and some of it fit to drink.

That’s the picture of ancient Mars that has emerged during the past few months thanks to discoveries by NASA's Curiosity rover, which has been exploring the Red Planet since touching down inside Gale Crater in August 2012.

The announcements have come in dribs and drabs, but presented together recently here at the European Planetary Science Congress, they provide compelling evidence that Mars was quite wet in the distant past. [The Search for Water on Mars (Photos)]

During many sessions at the conference, which was held Sept. 8 to Sept. 13 in London, scientists presented details of the rover’s most exciting finds, made before it began the long drive toward the towering Mount Sharp this past July.

And the words that could be heard most often were hydrogen, hydration, rocks and water. Especially water.

"We know that on Mars there was what we interpret to be a habitable environment, where water was good enough for us to drink," Melissa Rice, of the California Institute of Technology in Pasadena, said after a presentation on imaging results from Curiosity’s workhorse Mastcam instrument.

She talked about rocks that Curiosity studied earlier this year, finding evidence that ancient Mars could have supported microbial life.

"We know that we had an initial habitable environment when these rocks formed, and then sometime later — we don't know when — these rocks had water flowing through them, through these fractures, leaving calcium sulfate behind," Rice said. "We don't know if that era would have also been habitable, but it tells us that there were at least two major wet stages."

One of the rocks Rice mentioned was a mudstone that Curiosity drilled into. Inside, researchers found clay minerals, which meant either formation in, or substantial alteration by, water on Mars.

Further, this water had to be neutral and benign. That's a big deal as far as habitability goes; Curiosity's smaller, older cousins, NASA's Spirit and Opportunity rovers, found plenty of evidence of ancient Martian water after touching down in 2004, but most of it was likely extremely acidic.

"It’s amazing that we found a mudstone," said presenter Aileen Yingst, a Curiosity science team member from the Planetary Science Institute in Tucson, Ariz. "Mudstones mean that you have very fine grains inside the rock — meaning that these grains settle down slowly. On Earth, that usually means that it happened because of wind or water. And we think that it was probably water."

Researchers think the mudstone formed in a place where water was calm, such as a lake — perhaps an ideal place for microbes to survive and reproduce. [Curiosity's 7 Biggest Achievements (So Far)]

"If you’re a microbe that is trying to get a hold on a place to live, you don’t necessarily want to be living in churning water; it’s not good for you to start growing and thriving," Yingst said. "[Calm lake] water is a better place to live."

Another rock that received a lot of attention at the conference is Tintina, a tiny pebble that Curiosity rolled over and broke apart.

The small piece of rock revealed a snowy-white interior, strongly hinting at the presence of hydrated minerals that formed when water flowed through Gale Crater billions of years ago.

More strong evidence of Mars' wet past comes from Curiosity’s discovery of calcium sulfate veins — fissures in the surface rock that, once sampled with a laser-firing instrument called ChemCam, were shown to contain sulfate.

"If you have veins, then you have had water that has some sort of rock-forming mineral solution that has dissolved in the water, transported somewhere else and then deposited again. So it’s just another indicator that you’ve had about water activity," Yingst said.

And then there are the ancient river deposits.

One such feature of the Martian landscape, studied by Curiosity while it was at a small depression near its landing site called Yellowknife Bay, is an outcrop researchers dubbed Shaler.

Shaler is an example of cross-stratification, which comprises thin, inclined layers of sediment. Features resembling Shaler are commonly formed by rivers here on Earth; turbulent water creates "dunes" on the riverbed, which slowly migrate in the direction of the current.

What Curiosity has seen are the remnants of that migration process, researchers said.

"The grain size there are small pebbles and coarse sand grains, too large to be lifted up and transported by wind, so the only way we can produce these dunes is by water flow," said presenter Sanjeev Gupta from Imperial College London, a member of the Curiosity team.

"And these look exactly like the sort of features I’ve looked at on Earth formed by ancient rivers," Gupta added. "So we can tell that these outcrops are clear evidence for sustained water transport and dune migration. When they are preserved, they are recording minutes to hours of motion, and they’ve been preserved for millions to billions of years."

The water flows that produced the dunes probably occurred billions of years ago, Gupta said. Scientists are still analyzing Curiosity's images of the deposits, a process that will take months, he added.

Curiosity is now embarked on a long journey to Mount Sharp, which rises 3.4 miles (5.5 kilometers) into the Martian sky from Gale Crater's center.

The 1-ton rover may finally arrive at the mountain's base next May or June, team members say. Curiosity will then climb up through Mount Sharp's lower reaches, studying the many rock layers as it goes.

"Who knows what’s there? I hope we find evidence for ancient landscapes, and how they changed, how environments evolved," Gupta said.

"We want to understand what are the mechanisms for those rocks to form," Gupta said. "Was it clay minerals deposited in a lake? Or digenesis, which is when the rocks have been changed when fluids flowed through them and altered the minerals?"

Mount Sharp has been Curiosity's primary destination since before the rover's November 2011 launch. Mission scientists are eager to find out what the rover discovers there.

"I think the door is wide open and the best is yet to come," Yingst said. "Judging from the exciting stuff that we found so far, it’s only going to get better."