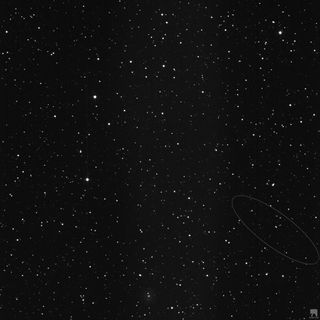 A bus-size asteroid that buzzed between the Earth and the moon at 3:25 p.m. EST (2025 GMT) on Thursday (Feb. 2) was spotted by one of the Slooh Community Observatory telescopes in the Canary Islands.

The asteroid, dubbed 2017 BS32, was first identified by the Panoramic Survey Telescope & Rapid Response System, or Pan-STARRS, on Jan. 30, and came to within half the distance between the Earth and the moon on Feb. 2, according to Slooh. The space rock is between 36 and 82 feet long (11 to 25 meters), and was traveling at a speed of 25,800 mph (42,000 km/h), or about 16 times faster than a bullet shot out of an AK-47 rifle, according to Slooh astronomer Erik Edelman.

Slooh hosted a live webcast on Thursday, giving viewers a real-time look at the asteroid as it sped by Earth. In an email to Space.com, Slooh representatives said this is the fourth near Earth object to come within Earth's lunar orbit in the last four weeks.

During the webcast, Edelman discussed the reasons why it can be difficult to spot asteroids and space rocks that come relatively close to Earth. Weather can play a major role in how frequently ground-based observatories can scan the sky, and even on clear nights, the light from a full moon can wash out the light from a very small, dim object like asteroid 2017 BS32. In addition, these space rocks are moving very fast, and can slip into and out of a telescope's field of view very quickly, making them difficult to spot, said the email from Slooh.