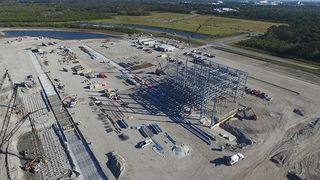 In an email message to subscribers, Bezos shared a picture of the site, where the bones of a building appear to be coming together. According to the email, construction is set to be completed by the end of 2017. Blue Origin will use the facility to manufacture its reusable, heavy-lift orbital rocket, New Glenn. The giant rocket will come in two forms: a towering 270-foot-tall (82 meters) version and an even larger 313-foot (95 m) variant.

"Just a very short note to update you on the 750,000 square-foot New Glenn rocket factory we’re building in Florida," Bezos wrote. "The team has made extraordinary progress — as you can see here, the first steel is now going up." [Photos: Blue Origin's Private Rockets & Spaceships]

The facility is located in Exploration Park, a 299-acre facility positioned next door to the Kennedy Space Center (KSC), about 50 miles east of Orlando. Exploration Park was developed by Space Florida, the state's aerospace economic development agency, in partnership with KSC. Bezos, who is both founder and CEO of Blue Origin, has said that the company plans to launch New Glenn from Cape Canaveral Air Force Station, located next to KSC. According to a statement from 2015 posted on the company website, the reusable rocket boosters will also be sent back to the facility after use, and prepared for additional flights.

"Locating vehicle assembly near our launch site eases the challenge of processing and transporting really big rockets," according to the statement.

In his email message sent out yesterday, Bezos included a digital image showing what the facility will look like when construction is complete.

Blue Origin has made a name for itself through its reusable, suborbital launch vehicle called New Shepard. The company says it has launched and landed one of the New Shepard rockets five consecutive times. Many industry leaders claim that reusable rocket technology will drastically reduce the cost of spaceflight, because most modern rocket designs discard their first-stage boosters after one use.

Blue Origin plans to sell tickets to average citizens so they can take short trips aboard the suborbital vehicle for recreational purposes. The flight could also be used by scientists to conduct microgravity experiments, potentially for a much lower cost than sending an experiment into orbit.