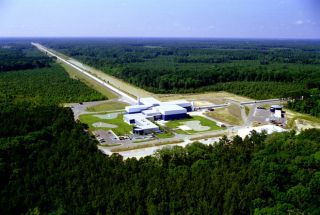 LIGO operates two detector sites: one near Hanford in eastern Washington, and another near Livingston, Louisiana. This photo shows the Livingston detector site.
(Image: © LIGO Collaboration)

The experiment that made the first direct detection of gravitational waves is once again hunting for these space-time ripples.

The Laser Interferometer Gravitational-wave Observatory (LIGO) stopped collecting data in January for a scheduled period of upgrades to its two detectors, located in Hanford, Washington, and Livingston, Louisiana. Now, the machines are back on, looking for gravitational waves coming from distant cosmic sources.

The LIGO collaboration announced the first direct detection of gravitational waves in February 2016 and announced a second detection in June. In both cases, the waves were created by sets of black holes colliding and merging together in space. [How To Detect Gravitational Waves – LIGO Simply Explained | Video]

Since the end of LIGO's last science run in January, "engineers and scientists have been evaluating LIGO's performance and making improvements to its lasers, electronics and optics —resulting in an overall increase in LIGO's sensitivity," scientists at the California Institute of Technology, which operates LIGO together with the Massachusetts Institute of Technology, said in a statement.

In 1915, Albert Einstein predicted the existence of gravitational waves. He showed that space and time are not separate features of the universe, but are united in a single fabric. Objects with mass create an imprint on the fabric, like a bowling ball on a trampoline. He also showed that extreme gravitational events, like the merger of two very massive objects, can create waves in that fabric.

The detection of gravitational waves has been compared to "hearing" the universe for the first time; the waves in space-time are similar to vibrations on the surface of a drum. These ripples provide an entirely new kind of information about the universe, and have the potential to reveal previously invisible features of the cosmos.

Indeed, some scientists have hailed the discovery of these waves as the start of a new era. The two black-hole mergers detected by LIGO very likely did not emit any light and, therefore, would have been invisible to other observatories and telescopes, LIGO scientists said.

"With our improved sensitivity, and a longer observing period, we will likely observe even more black-hole mergers in the coming run and further enhance our knowledge of black-hole dynamics," Caltech's David Reitze, executive director of the LIGO Laboratory, said in the statement. "We are only just now, thanks to LIGO, learning about how often events like these occur."

LIGO's detection of two black-hole mergers came as somewhat of a surprise to astrophysicists, based on estimations of the frequency of these mergers in the cosmos.

"As more black-hole mergers are detected by LIGO, scientists will start to get their first real understanding of black-hole pairs in the universe — including their population numbers, masses and spin rates," the scientists said in the statement. "LIGO may also detect the merger of neutron stars — the dense cores of exploded stars. Knowledge of both black-hole and neutron-star mergers will improve our understanding of stellar evolution and death."

Although scientists were able to provide indirect evidence for the existence of gravitational waves over the years, they were not able to detect them directly until September 2015, when LIGO made the observation. (The LIGO collaboration announced the historic detection months later, in February 2016.)

The change is incredibly small — if the length of LIGO's detectors were expanded from 2.5 miles (4 kilometers) to about 4.25 light-years, the machines would be looking for a change in distance of less than the width of a human hair. Reitze previously called the detectors "the most precise measuring device ever built."

The upgrade has provided the Livingston detector with a 25 percent greater sensitivity compared with the previous run, which means it can detect black-hole mergers at greater distances, the statement said. Increasing the search area should lead the detector to find more black hole mergers. The Hanford detector has the same sensitivity as it did during its last run, but it underwent other upgrades and improvements.

The LIGO collaboration plans to continue to improve the sensitivity of the instruments with each successive science run, according to the statement. LIGO began data collection in 2002 but was unable to detect a signal until the implementation of a major upgrade program called Advanced LIGO. The science run that ended in January was the first observation period following that upgrade.

"LIGO's scientific and operational staff have been working hard for the past year and are enthusiastic to restart round-the-clock observations," said Joseph Giaime, head of the LIGO Livingston observatory. "We are as curious as the rest of the world about what nature will send our way this year."