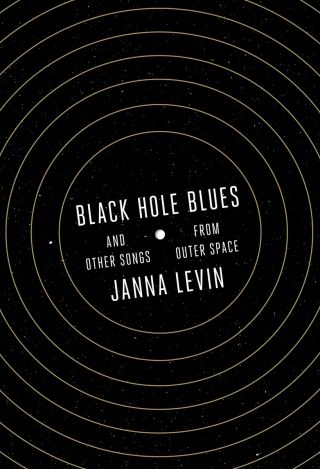 "Black Hole Blues and Other Songs from Outer Space" (Knopf, 2016) by Janna Levin.

A new book chronicles the 50-year odyssey that culminated in the first direct detection of gravitational waves. The book sets aside the science to focus on the personal passions and sacrifices of the experiment's champions.

"Black Hole Blues and Other Songs from Outer Space" (Knopf, 2016), the newest book by astrophysicist and author Janna Levin, may have had the most fortuitous release date of any book in science-writing history. The story that Levin recounts took place over 50 years, and the book itself has been cooking for about five. But somehow, Levin managed to finish her first draft of the manuscript the same week the Laser Interferometer Gravitational-wave Observatory (LIGO) made the first ever direct detection of gravitational waves (to the surprise of just about everyone involved with the experiment, Levin said).

But LIGO's success doesn't factor into Levin's book beyond an epilogue added just before publication, and she emphasized that she wouldn't have it any other way. The book is not a story of scientific success, but rather "a story of ambition and risk and obsession and success and failure," she said. Despite the very complicated science that went into the LIGO instrument, the story of its construction is universal. [Gravitational Waves Simply Explained With A Cube And Marble | Video]

Space.com talked with Levin about the LIGO story's epic arc, the science behind the discovery and the personalities who made it happen. The book is currently available in hardcover.

"Have you ever seen the movie 'Fitzcarraldo?'" Levin asked me over Skype in April.

I haven't, but I know it's a film about a man trying to move a massive steamboat over a dry mountain in the Andes, in order to cash in on natural resources in an isolated section of the forest. It's inspired by true events, but serves as an allegory for the pursuit of the seemingly impossible goals people set for themselves. Later, a documentary chronicled the incredibly difficult process of making the movie itself, giving the entire story a third level of symbolism.

"[In 'Fitzcarraldo,'] they build a boat and they try to drag it over a dry mountain. To me, [LIGO] is a similar story," Levin said. "It's really about exploration, and this crazy ambition and sort of the inability to turn away once the thing has taken hold of the mind. I think that's what it's really about."

Physicist Rai Weiss first conceived of the basic design of the LIGO experiment in 1967. For decades, he fought setbacks and engaged in political and professional battles — gaining allies and facing adversaries — because he believed so strongly that building a gravitational wave detector was worthwhile. Gravitational waves are ripples in the fabric of reality, or what scientists call space-time. This fabric is not a rigid backdrop, but rather a flexible web that can be twisted and warped by gravity. The gravitational waves detected by LIGO came from two black holes circling each other and colliding.

"Imagine mallets banging on a drum," Levin said. The drum is space-time; the mallets are various astrophysical phenomena that create gravitational waves. "And the motion and size and shape of the mallets determine how the drum rings. …. And it rings in response to mallets of all kinds. You can push out on it like an explosion. You can bang on it like two black holes. You can swish it like a paddle, and they will all make different sounds in the shape of the drum."

The idea of gravitational waves as sound is even more apt because the waves detected by LIGO have the same frequency as sound waves that can be heard by the human ear.

"In some sense, you can think of LIGO like a musical instrument," Levin said. "It's recording the shape of the ringing drum, and it's playing it back through an amplifier. So it's very close to the concept of sound. … You really could say it's a sound resonating through the medium of space-time, just like some sounds propagate through a wall or water. These are waves propagating through space-time." (Although gravitational waves are not pressure waves, she noted.)

But just like sound waves propagating through the air, gravitational waves lose energy as they travel, getting weaker and weaker and requiring an increasingly sensitive instrument to detect them. Weiss realized by the late 1970s that a device sensitive enough to detect these cosmic signals would need to be very large, and fairly expensive, and he'd need to find an agency willing to back the instrument over what might be a decade or more of construction.

The fruit of Weiss' labors is LIGO. The experiment actually consists of two separate instruments, one located in Hanford, Washington, and the other in Livingston, Louisiana. At each facility is an instrument that has two 2.48-mile-long (4 kilometers) arms arranged at right angles to each other in an "L" shape. If a gravitational wave passes by, it can stretch the length of one arm compared to the other, and this is what scientists measure. But the degree of change between the two lengths is less than the width of a single proton. If the arms were larger than the entire solar system, the change would still be less than the width of a human hair. The LIGO instruments have to be as large as they are in order to pick up such small distortions. [Hunting Gravitational Waves: The LIGO Laser Interferometer Project in Photos]

Scientists to the end

LIGO began operations in 2002, collecting data through 2007. While the machine operated as planned during that stretch of time, it didn't hear any gravitational waves. Many scientists doubted whether the machine would ever be sensitive enough to find the grail it sought, Levin said. In 2008, LIGO shut down and construction began on an upgraded, more sensitive version of the machine, called Advanced LIGO. And still, scientists were prepared to wait.

More pessimistic estimates held that LIGO wouldn't detect a signal until at least 2020.

During a test run of the instrument on Sept. 14, 2015, the Advanced LIGO detectors finally picked up the signal of a gravitational wave passing by the Earth. Levin is not a member of the LIGO collaboration, and was not privy to the discovery. But she said that on that same day, two copies of her book manuscript were printed, and then later that week were sent to Weiss and astrophysicist Kip Thorne for their review. Thorne was another early proponent of LIGO and one of its champions throughout the ordeal of getting the facility funded and built.

She met with Weiss in person, and they went through the manuscript page by page, reviewing every date and every claim. The book goes into some of the personal interactions that Weiss had with other scientists, not all of them pleasant. Sometimes, Weiss and Thorne disagreed about who said what, or when. It was an exhaustive process, but not an unpleasant one for Levin, she said.

"I so admire that neither of them said, 'I don't like this. You have to take it out.'" she said. "They might have said, 'Let me give you a counterpoint to what so-and-so said.' They really acted like scientists to the end. There was no, 'That's insulting to me. You're not allowed to say that.'"

At one point, Weiss even told Levin that even though certain details are technically public record, "It doesn't have to be in your book." She laughed, and added that quote to the manuscript.

A signal arrives in time

With the review completed, Levin's book was nearly ready to go to print, but the story ended on a cliff-hanger — would LIGO succeed? Weiss asked Leven what she would do if there was a detection — would she rewrite the story and completely change the ending? It would turn her astrophysical version of "Fitzcarraldo" into a tale focused on success rather than struggle.

"No way!" she told him. "I couldn't have tricked myself into writing it that way if I actually knew you had succeeded and made a detection."

But Levin told Weiss that if or when LIGO made a detection, she'd add an epilogue.

"I freaked out!" Levin said. "My heart's pounding. I jump up. I can barely read on!"

The note informed her of the Sept. 14 detection. It was signed by "Dave, Rai and Kip," who added that "we want to give you a chance to write your epilogue."

It's been less than a year since the detection, and Levin agreed that those days of intense doubt about whether LIGO would ever pick up a signal seem far away. Still, she said members of the public sometimes mistakenly think that the scientists "just turned it on and got a signal on the first day."

"I have to be like, no, wait a minute, you guys! It was like 50 years, and then they turned it on and they got a detection!" she said.

A new kind of astrophysics

The gravitational waves detected by LIGO came from two black holes circling each other and colliding. Scientists were surprised by the mass of those two black holes (slightly larger than the sun, but not as massive as the monsters that live at the centers of galaxies). The detection also indicated that black hole mergers like this might be more common than scientists previously thought.

As a theoretical physicist, Levin has a lot to look forward to as LIGO starts collecting more data, she said. Hopefully, that includes finding more black holes, as well other powerful gravitational-wave emitters like colliding neutron stars (the collapsed corpses of stars that aren't quite dense enough to become black holes, but are still incredibly massive), she said.

"It's suddenly given new enthusiasm for this field of black hole astrophysics, because we've detected our first black holes in some sense," Levin said. Previous detections of black holes actually rely on detecting material around the black holes (since the objects themselves don't radiate light).

The payoff from LIGO is only just beginning to come to light, but Levin said she holds to her belief that LIGO's story is important not because of its success but because it demonstrates the need for risk-taking in science.