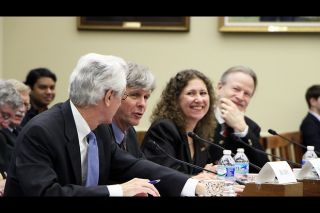 On Feb. 18, members of the LIGO Scientific Collaboration (LSC) testified before Congress about the Feb. 11 announcement that the Laser Interferometer Gravitational-Wave Observatory (LIGO) had directly detected gravitational waves — ripples in the fabric of space-time predicted by Albert Einstein 100 years ago.

The congressional panel members questioned the scientists about what the discovery means for humanity, science and innovation. Sheer inspiration, for both scientists and the general public, tops the list — as can be seen by the roughly 17 million tweets that followed the discovery — but that's closely followed by the ability to build a stronger, international workforce and to create spin-off technologies, the scientists said.

"The window to this new world of gravitational waves has just been cracked open," said David Shoemaker, project leader for Advanced LIGO and director of the LIGO Laboratory at the Massachusetts Institute of Technology. "As we open it wider [and] more people look out on the landscape, we'll be rewarded with discoveries that will, time and time again, give us all — scientists, students, leaders and laypersons — a thrill of understanding things much bigger than ourselves." [Hunting Gravitational Waves: The LIGO Laser Interferometer Project in Photos]

The waves came from two black holes that spent aeons circling each other, hurtling closer and closer, before they eventually collided, releasing great shudders of gravitational energy. That energy — which exceeded the energy output of all the stars in the universe combined — traveled for 1.3 billion years until it washed over the Earth in a signal just one-ten-thousandth the diameter of a proton.

"This discovery is a beginning, not an end," said Fleming Crim, assistant director for the National Science Foundation's Directorate for Mathematical and Physical Sciences. "It marks the birth of gravitational-wave astronomy — a new tool for understanding the cosmos."

Indeed, the first direct detection provided direct evidence that both gravitational waves and black holes exist — two phenomena that previously had been observed only indirectly. The continued study of gravitational waves holds great promise for future surprises, and scientists are continuing to improve the sensitivity of LIGO's detectors. (The upgraded detector is sometimes referred to as "Advanced LIGO.")

"The really good news is that Advanced LIGO is designed to be three times still more sensitive and should begin observations with an even greater reach this summer," Crim said.

Looking forward, scientists expect to see gravitational waves from neutron stars — stars that have stopped the fusion process in their cores and collapsed from their original size, becoming so dense that a single teaspoon would weigh 10 million tons on Earth — and supernovas, stars that have exploded with so much brightness they often briefly outshine their host galaxy. Observations on the former might help explain what happens to regular matter under such extreme conditions, and observations of the latter might help to explain why these stars explode in the first place, the LIGO scientists said.

But an even weirder discovery, scientists speculate, would occur if bursts of gravitational waves were detected coming from cosmic strings, hypothetical defects in the curvature of space-time. "There will certainly be surprises," Shoemaker said. "Every time we open a new window into the universe, we see new things, and we're surprised every time."

"The majesty of exploring our universe motivates this ambitious experiment," Crim said. "But as with all fundamental science, LIGO offers other important benefits. The science will advance education, inspiring students in developing the workforce our society requires."

Such inspiration can already be seen. Included in that list of 17 million tweets was one by President Barack Obamahimself, congratulating the LIGO collaboration and the National Science Foundation (which funds LIGO). LSC spokeswomen Gabriela González also pointed out that, on the Saturday following the announcement that LIGO had directly detected gravitational waves, almost 1,300 people, some driving hours to get there, visited the LIGO Science Education Center at the LIGO observatory in Livingston, Louisiana.

"After we announced our discovery, the amount of reaction to it worldwide was awe-inspiring," said David Reitze, director of the LIGO Laboratory at Caltech.

That inspiration will help to improve the scientific workforce in various ways, the scientists said.

"Many scientists, when they come to LIGO, they fall in love with it, and they choose to stay," Reitze said. "However, others go on to distinguished careers in both high-tech industry and national laboratories." LIGO employees might one day bring their polished skill set to places like SpaceX and Apple.

González noted that more than half of the members of LIGO's collaboration are postdoctoral scholars, graduate students and even undergraduate students. "These are young, busy and happy investigators in training in a very interdisciplinary and international scientific environment," she said. "We are training the workforce in the U.S."

Then, of course, there are technology spin-offs. Although every member who testified to the panel was careful to point out that he or she can't predict the exact technological advances, many drew the parallel to general relativity — a once-obscure theory that is now used in GPS measurements. Yes, Einstein's scary mathematical formulas help you find the closest Starbucks.

"There are remarkable efforts of vibration isolation, laser stabilization — all of those are spinning forward into technologies that are extremely important for the country," Crim said.