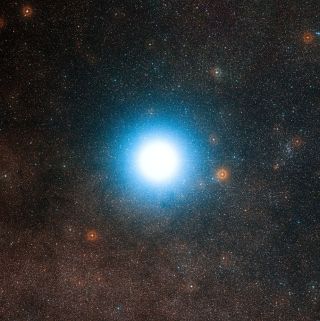 According to a new official designation by the International Astronomical Union, the neighboring star system Alpha Centauri will be known as "Rigil Kentaurus." This wide-field view of the sky around the bright star system was created from photographic images forming part of the Digitized Sky Survey 2. Image released Oct. 17, 2012.
(Image: © ESO/Digitized Sky Survey 2)

"Alpha Centauri" is getting the boot. The longstanding star name has been displaced by its ancient counterpart in a new International Astronomical Union (IAU) catalog that designates 227 official names for different stars in the sky.

The move was intended to reduce confusion, according to the IAU. For instance, a star like Fomalhaut has at least 30 different names, so it's difficult to figure out what to call it — or even how to spell it. Variations over the years have included Fumalhaut, Fomalhut and even the unusual Fomal'gaut.

The IAU, which is the official arbiter of astronomical names, chose single names to refer to those stars that have historically had many. Some of the decisions may rattle longtime observers, however. For example, the binary star Alpha Centauri, which lies 4.35 light-years from the sun, is now known officially as "Rigil Kentaurus," the ancient name for the system. [What Do We Know About Alpha Centauri?]

Neighboring Proxima Centauri — the closest star to the sun, at just 4.22 light-years away — will keep its name, which will make it easier to keep track of the nearest exoplanet to Earth (which is currently known by the name Proxima b.)

In many cases, the names are the same as before; for instance, while Vega is reported to have dozens of different names, "Vega" will stand as the official name, echoing the decisions of star catalogs in the Western Hemisphere for centuries. Official alphanumeric designations for stars, which are used by professional astronomers, will remain the same.

"Since the IAU is already adopting names for exoplanets and their host stars, it has been seen as necessary to catalogue the names for stars in common use from the past, and to clarify which ones will be official from now on," Eric Mamajek, chair and organizer of the working group, said in a statement.

The decision comes after the IAU's working group on star names began combing the literature in May 2016 to determine which star names would be officially approved. The group favored one-word names as well as those names that had histories in astronomy, culture or the natural world. (Many star names, the IAU noted, have not changed much since the Renaissance and come from Greek, Latin and Arabic roots.)

"The group aims to decide which traditional star names from cultures around the world are the official ones, in order to avoid confusion," the IAU said in the statement. "Some of the most common names for the brightest and most famous stars in the sky had no official spelling, some stars had several names, and identical names were sometimes used for completely different stars altogether."

The full list of the 227 stars is available on the IAU's website. This catalog includes 18 star names that were approved in December 2015, 14 of them proposed and voted on by the public for the NameExoWorlds contest. The approved stellar names will not be available for asteroids, planetary satellites or exoplanets "so as to further reduce confusion," the IAU said of the listing.