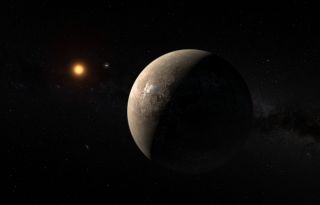 This artist’s impression shows the exoplanet Proxima b, which orbits the red dwarf star Proxima Centauri. The double star Alpha Centauri AB appears in the image between the exoplanet and its star.
(Image: © ESO/M. Kornmesser)

The star closest to the sun hosts a planet that may be very much like Earth, a new study reports.

Astronomers have discovered a roughly Earth-size alien world around Proxima Centauri, which lies just 4.2 light-years from our own solar system. What's even more exciting, study team members said, is that the planet, known as Proxima b, circles in the star's "habitable zone" — the range of distances at which liquid water could be stable on a world's surface.

"We hope these findings inspire future generations to keep looking beyond the stars," lead author Guillem Anglada-Escude, a physics and astronomy lecturer at Queen Mary University of London, said in a statement."The search for life on Proxima b comes next." [In Pictures: The Discovery of Planet Proxima b]

The discovery of Proxima b was a long time in the making.

Astronomers have been hunting intensively for planets around Proxima Centauri for more 15 years, using instruments such as the Ultraviolet and Visual Echelle Spectrograph (UVES) and the High Accuracy Radial velocity Planet Searcher (HARPS), both of which are installed on telescopes run by the European Southern Observatory in Chile.

UVES, HARPS and other instruments like them allow researchers to detect the slight wobbles in a star's movement caused by the gravitational tugs of orbiting planets.

Astronomers found hints of such a wobble back in 2013, but the signal was not convincing, Anglada-Escude said. So he and a number of other researchers launched a campaign to ferret out the planet. They called this effort the Pale Red Dot — a nod to Carl Sagan's famous description of Earth as a "pale blue dot," and the fact that Proxima Centauri is a small, dim star known as a red dwarf.

The Pale Red Dot team focused HARPS on Proxima Centauri every night from Jan. 19, 2016, through March 31 of this year. After they combined this new data with UVES observations from 2000 through 2008 and HARPS observations from 2005 through early 2014, the signal of a possible planet came through loud and clear.

Then, after analyzing observations of the star's brightness made by several other telescopes, Anglada-Escude and his colleagues ruled out the possibility that this signal could be caused by the variable activity of Proxima Centauri.

"The conclusion: We have found a planet around Proxima Centauri," Anglada-Escude said Tuesday (Aug. 23) during a news conference. [The Search for Another Earth (Video)]

How did Proxima b remain undetected for so long, in an era when astronomers are finding exoplanets thousands of light-years from Earth?

"The uneven and sparse sampling, combined with the longer term variability of the star, seem to be the reasons why the signal could not be unambiguously confirmed with pre-2016 data, rather than the total amount of data accumulated," the researchers wrote in the new study, which was published online today (Aug. 24) in the journal Nature.

Incidentally, the team also spotted possible signs of an additional Proxima Centauri planet, which would have an orbital period of between 60 and 500 days. But that second signal is much weaker and might be caused by stellar activity, the researchers said.

The HARPS and UVES data indicate that Proxima b is about 1.3 times more massive than Earth, which suggests that the exoplanet is a rocky world, the researchers said. [6 Strange Facts About Planet Proxima b]

Proxima b lies just 4.7 million miles (7.5 million kilometers) from its host star and completes one orbit every 11.2 Earth days. As a result, it's likely that the exoplanet is tidally locked, meaning it always shows the same face to its host star, just as the moon shows only one face (the near side) to Earth.

For comparison, Earth orbits about 93 million miles (150 million km) from the sun. But Proxima b's relatively tight orbit puts it right in the middle of the habitable zone, because red dwarfs are so much cooler and dimmer than sun-like stars, team members said. Not much else is known about Proxima b, so it's unclear just how hospitable the planet may be to life. In fact, there are reasons to be pessimistic on this front, noted Artie Hatzes, an astronomer at the Thuringian State Observatory in Germany.

Proxima Centauri fires off powerful flares, and the planet therefore experiences a much higher dose of high-energy X-ray radiation than Earth does, Hatzes, who is not part of the discovery team, wrote in an accompanying "News and Views" article in the same issue of Nature.

"Energetic particles associated with the flares may erode the atmosphere or hinder the development of primitive forms of life," Hatzes wrote. "We also don't know whether the exoplanet has a magnetic field, like Earth, which could shield it from the dangerous stellar radiation."

But the higher X-ray flux is not a "showstopper" for life, Anglada-Escude and his colleagues said.

"None of this does exclude the existence of an atmosphere, or of [surface] water," co-author Ansgar Reiners, a professor at the University of Göttingen's Institute of Astrophysics in Germany, said during Tuesday's news conference.

How Proxima Centauri behaved in the distant past is more relevant to the newfound planet's potential habitability than current radiation levels are, Reiners added.

"What is more interesting is the history of the planet — whether in the early ages, the young ages, of this planet the star was so active, and the star emitted so much high-energy radiation, that it blew away the atmosphere and may have blown away the water also," he said.

Other aspects of the planet's history also have a bearing on just how wet Proxima b may be. For example, if the alien world formed far from the star but then migrated inward, it is likely water-rich; if it formed near its present position, it likely started out much drier, study team members said. (But even this latter scenario doesn't preclude the existence of large amounts of water on Proxima b, Anglada-Escude stressed; comet and/or asteroid strikes could deliver the substance, as apparently happened here on Earth, he said.)

Tidally locked planets were once regarded as inhospitable to life — baked too hot on the star-facing side, and freezing cold on the dark side. But recent research suggests that such worlds may indeed be habitable; winds in their atmospheres could distribute heat, smoothing out temperature extremes.

And if Proxima b is potentially habitable, life-forms have a long time to gain a foothold there: Red dwarfs keep burning for trillions of years, in contrast to stars like the sun, which die after 10 billion years or so.

"Proxima Centauri will exist for several hundreds or thousands of times longer than the sun," Hatzes wrote in his "News and Views" piece. "Any life on the planet could still be evolving long after our sun has died."

Proxima b likely does not "transit," or cross the face of, its host star from Earth's perspective, Anglada-Escude and his colleagues said.

That characteristic will make it tougher to study Proxima b further; astronomers can learn a lot about the atmospheres of transiting exoplanets by studying the starlight that passes through them. (NASA's $8.8 billion James Webb Space Telescope, which is scheduled to launch in late 2018, will use this method to look for possible signs of life in the atmospheres of nearby alien worlds.)

But Proxima b is close enough to Earth that scientists may soon be able to image it directly. Indeed, it should be possible to resolve the planet (separately from its host star) using a telescope with an aperture of 11.5 feet (3.5 meters), provided that the scope is outfitted with some advanced technology, such as a starlight-blocking coronagraph, Reiners said. (For perspective, NASA's famous Hubble Space Telescope has an aperture of 7.9 feet, or 2.4 m.)

"We are quite far from it right now, but physics allows us to do it," he said. "And then, you can study the light coming from the planet itself, and that gives you the opportunity to learn about the atmosphere spectroscopically or photometrically, or whatever you want."

A trip to Proxima b?

Proxima b is also a prime target for a potential up-close visit by a future space probe.

This past April, scientists and engineers announced the $100 million Breakthrough Starshot project, which aims to develop the technology required to accelerate tiny, sail-equipped "nanocraft" to 20 percent the speed of light using powerful lasers.

Breakthrough Starshot team members said they hope to eventually launch flotillas of such postage-stamp-size probes to Alpha Centauri — a binary star system about 4.37 light-years from the sun. (In 2012, incidentally, astronomers analyzing HARPS data announced the discovery of a roughly Earth-size world around the star Alpha Centauri B, but later work suggested that the putative planet does not actually exist.)

Spacecraft traveling at 20 percent the speed of light could make the trip to Alpha Centauri in about two decades, as opposed to thousands of years for conventionally powered probes.

Proxima Centauri lies just 0.24 light-years from Alpha Centauri, and is regarded by some scientists as part of the latter system — so Breakthrough Starshot team members are recalibrating possible mission profiles a bit now.

"With today's announcement, we now know that there's at least one planet, the one orbiting Proxima Centauri, that has some characteristics similar to the Earth," Pete Worden, chairman of the Breakthrough Prize Foundation, said during a news conference today.

"Over the next decade, we will work with experts here at ESO and elsewhere to get as much information as possible about the Proxima Centauri planet, perhaps as noted, even including whether it might bear life, prior to launching mankind's first probe towards the star," Worden added. "We also hope to obtain similar data about the other nearby stars, Alpha Centauri A and B."