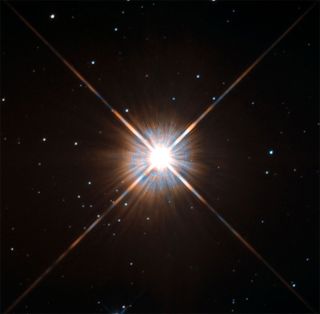 Astronomers have found a rocky and possibly Earth-like planet circling the star closest to the sun, according to the German magazine Der Spiegel.

Scientists with the ESO will announce the find later this month, according to Der Spiegel, which cited an unnamed astrophysicist on the discovery team as its source. [In Images: The 1st Earth-Size Alien Planets Ever Found]

ESO officials neither confirmed nor denied the report.

"We were surprised to see the article in Der Spiegel and do not know the source," ESO spokesman Richard Hook told Space.com via email. "ESO has no further comment to make at present."

Proxima Centauri is a red dwarf, a star much smaller and cooler than the sun. About three-quarters of all stars in the Milky Way galaxy are red dwarfs.

Proxima Centauri lies just 0.24 light-years from the two stars of Alpha Centauri, and many astronomers regard the red dwarf as part of the latter system.

In 2012, astronomers announced that La Silla's High Accuracy Radial Velocity Planet Searcher instrument, or HARPS, had spotted a rocky, roughly Earth-size planet around Alpha Centauri B. This world, known as Alpha Centauri Bb, circles its host star once every 3.2 days, and is therefore much too hot to support life, discovery team members said at the time.

However, a 2015 study found that the detected signal of Alpha Centauri Bb was merely an artifact and that the planet almost certainly does not exist.

To date, astronomers have discovered more than 3,200 confirmed alien planets, with NASA's Kepler space telescope responsible for about two-thirds of the finds. Kepler's work suggests that, on average, every star in the Milky Way hosts at least one planet.