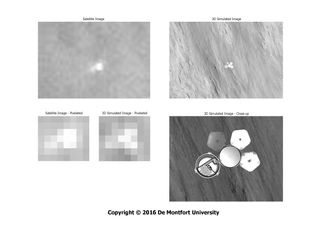 This image shows real and simulated photos of the United Kingdom's Beagle 2 lander on the surface of Mars. Real images were captured by NASA's Mars Reconnaissance Orbiter.
(Image: © De Montfort University/University of Leicester/Beagle 2/NASA/JPL/University of Arizona)

Europe's first Mars lander did indeed touch down softly on the Red Planet back in 2003, and likely deployed at least three of its four solar panels, a new study suggests.

The probe, known as Beagle 2, was supposed to land on Dec. 25, 2003, but it never phoned home from the Martian surface, and many experts therefore assumed the spacecraft had crashed. But in January 2015, scientists announced they had spotted Beagle 2 in images taken by NASA's Mars Reconnaissance Orbiter (MRO).

The MRO photos showed what appeared to be an intact spacecraft, suggesting that Beagle 2's failure came after, rather than during, the landing process. The new study further bolsters this interpretation and adds a few new details to the Beagle 2 story, team members said. [The Search for Beagle 2 in Photos]

Using commercially available visual-effects and animation software, the researchers took simulated photos of Beagle 2, imaging the virtual lander in a number of different configurations and at a variety of sun angles. They then compared these simulated images to the real ones taken by MRO — and found that the closest match was a Beagle 2 that had landed safely and deployed most of its solar panels.

Furthermore, the analysis suggests that the failure of even one solar panel to deploy would probably have seriously hampered Beagle 2's ability to use its antenna, making communication with Earth difficult — a theory that other researchers have invoked to explain the lander's puzzling silence.

"We have gathered more information on the failure of Beagle 2 to communicate, and we are one step closer to knowing what happened," former Beagle 2 mission manager Mark Sims, who's currently a professor of Astrobiology and Space Instrumentation at the University of Leicester in England, said in a statement.

"In reality, we may, of course, never know exactly what caused its failure to communicate after what has been confirmed as a successful landing, which was a fantastic achievement by the Beagle 2 team," added Sims, who came up with the new "reflection-analysis" technique. "The work shows frustratingly that Beagle 2 came so close to working as intended on Mars."

Sims and his colleagues plan to publish the results in a scientific journal.

The United Kingdom-led Beagle 2 lander was part of the European Space Agency's (ESA) Mars Express mission, which launched in March 2003. Beagle 2 separated from its mothership, the Mars Express orbiter, on Dec. 19 of that year and headed down toward the surface for a Christmas Day touchdown.

The 7-foot-wide (2 meters) Beagle 2 was supposed to hunt for signs of Martian life, study the planet's weather and geology, collect samples with a burrowing instrument dubbed "the mole" and perform a variety of other tasks. None of that happened, of course. (The Mars Express orbiter had better luck: It aced its orbit-insertion burn on Dec. 25, 2003, and is still studying the Red Planet today.)

Europe attempted its second-ever Mars landing last month, and that one didn't go according to plan, either. The Schiaparelli lander — part of Europe's ExoMars program — slammed hard into the Red Planet's surface on Oct. 19, gouging out a crater that MRO spotted a few days later.

The failure probably occurred because Schiaparelli didn't fire its descent-slowing thrusters for nearly long enough, ESA officials have said, though the investigation is continuing.

Like Beagle 2, Schiaparelli traveled to Mars with a mothership — in this case, the ExoMars Trace Gas Orbiter (TGO). And, like the Mars Express orbiter, TGO successfully made it into orbit around the Red Planet.

ESA plans to attempt its third Mars landing in 2021, when a life-hunting rover is scheduled to arrive at the Red Planet. This rover is the linchpin of the two-phase ExoMars program, which ESA leads with assistance from the Russian federal space agency, known as Roscosmos. Indeed, the main purpose of Schiaparelli's journey to Mars was to test out technologies ahead of the 2021 rover arrival, ESA officials have said.