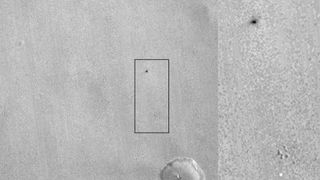 This image by NASA's Mars Reconnaissance Orbiter shows what appears to be the ExoMars lander's parachute (bright spot at bottom) and the impact site of the lander itself (dark patch at top).
(Image: © NASA/JPL-Caltech/MSSS)

"Estimates are that Schiaparelli dropped from a height of between 2 and 4 kilometers [1.2 to 2.5 miles], therefore impacting at a considerable speed, greater than 300 km/h [186 mph]," ESA officials wrote in an update today (Oct. 21).

"The relatively large size of the feature would then arise from disturbed surface material," they added. "It is also possible that the lander exploded on impact, as its thruster propellant tanks were likely still full. These preliminary interpretations will be refined following further analysis."

ExoMars team members think those tanks were still full because Schiaparelli's data indicate that the lander didn't fire its descent-slowing thrusters nearly as long as it was supposed to, ESA officials have said.

The large, dark patch is about 3.4 miles (5.4 km) west of Schiaparelli's intended landing site within Mars' Meridiani Planum, a highland region just south of the Red Planet's equator. The impact site is well within the planned landing ellipse, which measures 62 miles long by 9 miles wide (100 by 15 km), ESA officials said.

Schiaparelli launched this past March along with the Trace Gas Orbiter (TGO). Together, the two spacecraft form the first part of the two-phase ExoMars program, which is led by ESA with the Russian federal space agency, Roscosmos, as main partner.

Schiaparelli's main task was to help prove out the technologies required to get a life-hunting rover — ExoMars' second phase — on the ground safely in 2021. ESA officials have said that Schiaparelli's descent through the Martian atmosphere will be useful in this regard, even though the probe didn't stick its landing.

While Schiaparelli was barreling through the Martian air Wednesday morning, TGO was executing a 139-minute-long, make-or-break engine burn to get into orbit around the Red Planet. This latter maneuver went well, and TGO is now circling the planet every 4.2 days on a highly elliptical path, ESA officials said.

TGO is in good shape and will start calibrating its science instruments next month, they added. Early next year, the orbiter will begin shifting to its final science orbit — a circular path that lies about 250 miles (400 km) above the Martian surface. TGO should achieve this orbit in March 2018 and begin its official two-year science mission shortly thereafter.

The main goal of that mission is to help figure out the origin of methane and other low-abundance gases in the Red Planet's atmosphere. Methane is of particular interest to astrobiologists, because the gas is a potential sign of life (though it can also be produced by geological processes).

TGO will also serve as a communications relay for the ExoMars 2020 rover and NASA's operational surface craft, the Opportunity and Curiosity rovers (and, later, the American space agency's 2020 Mars rover), before ending its life in late 2022.