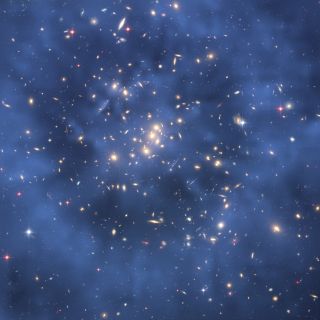 The search for elusive dark matter may have just gotten a big boost.

Scientists have calculated the predicted mass of the axion, a hypothetical particle that some astronomers think may be the main constituent of dark matter. The new finding should greatly aid the hunt for axions, and could therefore help solve the longstanding dark-matter mystery, study team members said.

"The results we are presenting will probably lead to a race to discover these particles," study co-author Zoltan Fodor, of Eötvös University in Budapest, Hungary, said in a statement. [Gallery: Dark Matter Throughout the Universe]

Dark matter apparently neither absorbs nor emits light, which explains its name. Though astronomers can't observe dark matter directly, they strongly suspect that the stuff exists based on its gravitational effects. For example, there is not nearly enough "normal" matter within galaxies to explain their rapid rotation, astronomers say.

Indeed, normal matter — the stuff that makes up stars, planets and everything else we can see and touch — is but a minor component of the universe: Astronomers think dark matter outweighs normal matter by a factor of 6 to 1. (And dark energy, the puzzling force behind the universe's accelerating expansion, makes up an even bigger portion of the universe's mass-and-energy budget. Together, dark energy and dark matter make up about 96 percent of the cosmos.)

But scientists don't know what dark matter is. Some researchers suspect it's made up of relatively few heavy particles, whereas others favor a hypothesis involving huge numbers of very light particles, known as axions.

Scientists have been searching for heavy dark-matter candidates using particle accelerators and sensitive underground detectors, but so far they've come up empty. Finding direct evidence of axions is likely an even taller order — but it is theoretically possible, study team members said.

"However, to find this kind of evidence, it would be extremely helpful to know what kind of mass we are looking for," co-author Andreas Ringwald, a theoretical physicist at the German Electron Synchrotron (which is commonly known by its German acronym, DESY) in Hamburg, said in the same statement. "Otherwise, the search could take decades, because one would have to scan far too large a range."

The new study, which was published online today (Nov. 2) in the journal Nature, should help in this regard. The research team, led by Szabolcs Borsanyi of the University of Wuppertal in Germany, used a supercomputer to calculate the likely mass of the axion. The scientists found that, if axions are indeed the primary component of dark matter, they likely have a mass between 50 and 1,500 microelectronvolts — meaning they're up to 10 billion times lighter than electrons.

This would mean that every cubic centimeter in the universe contains, on average, about 10 million axions, researchers said. But dark matter is clumped, not evenly distributed; Earth's region of the Milky Way would have about 1 billion axions per cubic centimeter.

If the new mass prediction is accurate, scientists should be able to figure out whether axions actually exist within the next few years, study team members said.

Axions are also predicted by an extension of quantum chromodynamics (QCD), the theory describing the strong nuclear force, one of the four fundamental forces of nature (along with gravitation, electromagnetism and the weak nuclear force).

The strong force is time-symmetric, meaning it wouldn't change if time for some reason began flowing backward instead of forward.

"However, the equations of QCD might contain a symmetry-violating term that could theoretically take any value. And nature has chosen to set this term to zero," Maria Paolo Lombardo, of the National Institute for Nuclear Physics in Rome, wrote in an accompanying "News and Views" piece in the same issue of Nature.

"Why is this?" Lombardo added. "The leading explanation is that the term is not zero, but is cancelled out by the presence of a 'neutralizing' particle called the axion, which has yet to be discovered."

So the detection of the axion would solve a quantum-physics puzzle as well as a cosmological one. Stay tuned!