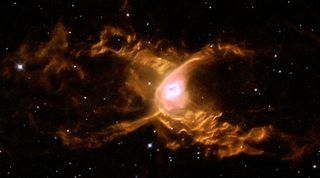 Using Hubble's powerful camera, an image of the Red Spider Nebula in the constellation of Sagittarius clearly displays the power of the stellar wind expanding the lobes.
(Image: © ESA/Garrelt Mellema (Leiden University, the Netherlands))

The Red Spider Nebula welcomes Halloween with its eerie lobes and ghostly shine.

Large ripples constitute the expansive lobes of the Red Spider Nebula. The two lobes of the nebula represent a typical expression at the end of a star's life, with material from the star gushing into space at high speeds. [Haunting Photos: The Spookiest Nebulas in Space]

The nebula, thousands of light years from Earth in the constellation of Sagittarius, contains one of the hottest known stars which creates waves 100 billion kilometers (62.4 billion miles) high with its powerful cosmic winds. The speed of the waves arise from supersonic shocks forming from local gas compression, heating and rapid expansion in the lobes. Atoms trapped in the the shock create the dazzling radiation seen here.

Hubble has been returning images of the deep recesses of our Universe to us since April of 1990. After being repaired and upgraded with five separate Space Shuttle missions, with the last in 2009. While Hubble could operate into the 2030s, its successor, the James Webb Space Telescope (JWST) is scheduled to launch in 2018.