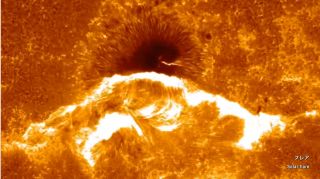 A spectacular solar flare erupts near a huge sunspot on the surface of the sun in this view from the Japanese Hinode solar observatory, which is celebrating its 10th anniversary of its Sept. 23, 2006 launch. This still image is from a NASA/JAXA video marking Hinode's 10th year in space.
(Image: © NASA Marshall Space Flight Center)

Japan's Hinode sun-observing satellite has delivered spectacular imagery and invaluable measurements of the sun since it launched into space 10 years ago on Sept. 23, 2006.

Hinode is part of an international mission led by the Japan Aerospace Exploration Agency (JAXA) in collaboration with NASA and other partners. Over the course of a decade, the spacecraft has provided remarkable views of violent solar flares, eruptions, transits across the sun and much more. To celebrate Hinode's 10-year anniversary, JAXA and NASA unveiled this amazing video showcasing the probe's launch and most spectacular views of our closest star.

The Hinode satellite — named after the Japanese word for "sunrise" — travels in a sun-synchronous orbit around Earth less than 400 miles (640 kilometers) above the planet's surface. It was launched into orbit to get an up-close view of the sun and measure its magnetic field. To accomplish this feat, the satellite is equipped with three scientific instruments: the Solar Optical Telescope, X-ray Telescope and Extreme Ultraviolet Imaging Spectrometer. [Solar Eclipse Photos: The View From Space]

Using these tools, the Hinode probe is able to peer deep into the sun's innermost atmosphere and study the generation, transport and dissipation of magnetic energy from the lower solar atmosphere, called the photosphere, to the upper solar atmosphere (the corona), NASA officials said on the Hinode mission page.

Scientists use Hinode's measurements to learn more about how energy that is stored in the sun's magnetic field is released in the form of violent solar fares or eruptions.

During its tenure in space, the Hinode satellite has also watched as the moon passed in front of the sun for what is known as a solar eclipse. Since the satellite constantly orbits Earth from pole to pole, it provides a unique view of that solar event.

In 2011, Hinode spotted two huge holes, or gaps, in the sun's magnetic field. Scientists call the sun holes "coronal holes" and have found that they act as gateways for solar material and gas to escape out into space.

With 10 years under its belt, the Hinode satellite continually reveals new solar secrets and spectacular imagery of Earth's closest star.