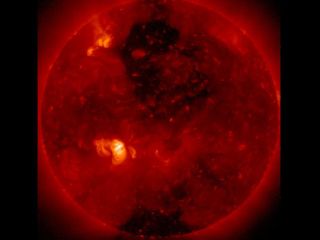 On Feb. 1, 2011, the Hinode satellite captured this breathtaking image of a coronal hole, seen in the top center of the image. A second, polar coronal hole can also be seen at the bottom of the image.
(Image: © Hinode/XRT)

A Japanese spacecraft has spotted two huge holes in the sun – gateways for solar material and gas to spill out into space.

Scientists call the sun holes "coronal holes." They are gaps in the sun's magnetic field which make a hole through the star's super-hot outer atmosphere – the corona – allowing gas to escape, according to a NASA description.

Japan's Hinode sun-watching satellite photographed the sun's two coronal holes on Feb. 1. In the image, one coronal hole appears near the top center of the sun while another one – a polar coronal hole – is visible near the bottom of the view.

The holes appear darker than other parts of the sun, but there's a reason for that.

"The holes are relatively cool in temperature as compared to the active regions nearby – such as the bright region on the lower left portion of the solar disk – the cooler temperature is one of the reasons for the darker appearance," NASA officials said in a statement.

Japan's Hinode solar observatory has been studying the sun since the spacecraft's launch in 2006. The satellite is designed to study the sun's magnetic field to help scientists better understand how its energy propagates through different layers of the sun's atmosphere.

The mission is a collaborative effort between the Japan Aerospace Exploration Agency, Japan's National Astronomical Observatory, NASA, and the space agencies of Norway, the United Kingdom and the European Space Agency.