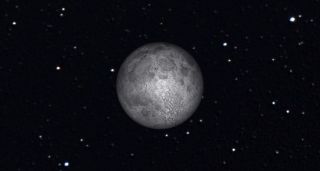 The full moon known as this year's Harvest Moon will rise tonight (Sept.16) and will be shaded by a subtle type of lunar eclipse for some skywatchers in Africa, Asia and Australia.

A minor penumbral lunar eclipse will accompany the full moon tonight, and will be visible from Europe, Africa, Asia, Australia and the Western Pacific. The Slooh Community Observatory will offer a live webcast of the eclipse at Slooh.com beginning at 12:45 p.m. EDT (1645 GMT). You can also watch the lunar eclipse webcast on Space.com, courtesy of Slooh. [Harvest Moon Lunar Eclipse Guide: When & How to See It]

The Harvest Moon is the one that comes the closest to the autumnal equinox, so this year it falls in September, although occasionally this title can be bestowed upon the October full moon. That will happen 12 times from 1970 to 2020, occurring next in 2017. The 2016 version of the Harvest Moon comes six days prior to the autumnal equinox, although it can occur as early as Sept. 8 (as it did in 2014) or as late as Oct. 7 (as happened in 1987).

Many think that the Harvest Moon remains in the night sky longer than any of the other full moons seen during the year, but that is not so. What sets the Harvest Moon apart from other full moons is that it occurs at the climax of the harvest season, so farmers can work late into the night by the moon's light. This moon rises at about the time the sun sets, and — more importantly — at this time of year, instead of rising its normal average of 50 minutes later each day, the moon seems to rise at somewhat the same time each night.

In actuality, from midnorthern latitudes (+40 degrees), the rising of the moon over a three-night span centered on full phase (Sept. 15, 16 and 17) comes, on average, 38 minutes later each night. The night-to-night difference is greatest for the more southerly locations (Miami, located at latitude +25.8 degrees, sees moonrise come an average of 45 minutes later). Meanwhile, the difference is less at more northerly locations (at Edmonton, Canada, located at latitude 53.5 degrees N, the average difference is only 28 minutes). [Harvest Moon 2016: When and How to See September's Full Moon]

The reason for this seasonal circumstance is that the moon appears to move along the ecliptic, and at this time of year, when rising, the ecliptic makes its smallest angle with respect to the horizon for those living in the Northern Hemisphere.

In contrast, for those living in the Southern Hemisphere, the ecliptic at this time of year appears to stand almost perpendicular (at nearly a right angle) to the eastern horizon. As such, the difference for the time of moonrise exceeds the average of 50 minutes per night. At Sydney, Australia (latitude -33.9), for instance, the night-to-night difference amounts to 67 minutes.

Interestingly, for those who live near 70 degrees north latitude, the moon does indeed appear to rise at about the same time each night around the period of the Harvest Moon. And for those who live even farther to the north, a paradox occurs: The moon appears to rise earlier each night! At Barrow, Alaska (latitude +71.3 degrees), for instance, the times of moonrise on Sept. 15, 16 and 17 will be, respectively, 9:05 p.m., 9:02 p.m. and 8:59 p.m. Alaska Daylight Time. So from Barrow, Alaska, the moon will seem to rise an average of 3 minutes earlier each night!

And an eclipse too!

The Harvest Moon will also undergo an eclipse of sorts, although this event will not afford viewers much of a spectacle. It's a "penumbral" eclipse, which occurs when the moon passes through the outer fringe of the Earth's shadow. Unlike when the moon interacts with the dark umbral shadow of Earth, resulting in a noticeable "bite" out of the lunar disk, a penumbral eclipse at best causes a tarnishing or "smudginess" on the moon at maximum effect.

Unfortunately, North America is not in the viewing zone. Eastern Africa, western and central Asia, and western and central Australia are in the best positions to see this eclipse. At maximum (2:54 p.m. EDT, or 1854 GMT), 93 percent of the moon's diameter will be immersed in the Earth's penumbral shadow; the upper part of the moon will appear noticeably shaded.

So for all of you (including me) who live in North America, don't be dejected that you're missing out on this shady little drama.

It's really an underwhelming event.

Editor's note: If you see an amazing Harvest Moon or live in one of the visilibility regions for the penumbral lunar eclipse and capture a striking photo that you'd like to share with Space.com and our news partners for a story or gallery, let us know! You can send images and comments in to: spacephotos@space.com.