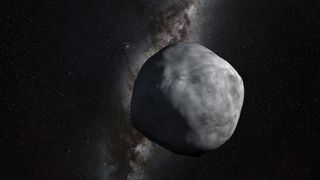 The target of the OSIRIS-REx mission is an asteroid known as Bennu, which circles the sun just inside the orbit of Mars (occasionally crossing Earth's orbital path). Although Bennu is unlikely to collide with the planet, understanding its composition could help scientists figure out how to deflect other rocky bodies that may be on a crash course with Earth.

"I think that's the whole reason we have missions like OSIRIS-REx — to go out and see what we really know about asteroids," Lindley Johnson, director of NASA's Planetary Defense Coordination Office, said at a news conference Wednesday (Sept. 7). [NASA's Mission to Asteroid Bennu: OSIRIS-REx Complete Coverage]

After the sun formed, leftover dust and rock circled the newborn star in a disk. The material smashed together, building planetary embryos. Some bits of debris hurled down on the young planets, while some material was cast out of the solar system forever. Over time, the fiery rain slowed as the population of dust and rock dwindled.

As life evolved on Earth, bits of remaining debris occasionally crashed down — at times, wiping out plants and animal species. While most of the largest rocks have already collided with planets or have left the solar system, enough leftover material remains to pepper our planet.

"Over a hundred tons of material fall to Earth every day," Johnson said.

Most of that is dust, but occasionally, a solid chunk of rock makes it to the ground (a meteorite). Those meteorites can be chunks that have broken off of asteroids, but they also may be debris that was once part of a planet or the moon and was blown off in an early collision. For example, Earth is covered in meteorites that were once part of the moon and Mars — places humans have been able to study up close with various probes, rovers and (in the case of the moon) human missions.

But asteroids are more challenging. The sample of Bennu that scientists are aiming to return in the OSIRIS-REx mission will help scientists better understand the composition of other asteroids and space debris if they were to prove threatening.

During the OSIRIS-REx mission, scientists also will study how the sun affects the orbital paths of small rocky bodies. As sunlight strikes a rotating asteroid, the radiating heat provides a tiny thrust that can change the orbit of the rock — a process known as the Yarkovsky effect.

"We can't just determine where an asteroid is going to go just by orbital dynamics," said Alex Young, a heliophysics scientist at NASA's Goddard Space Flight Center in Greenbelt, Maryland. "We have to account for this Yarkovsky effect."

Observing how the sun ever so slightly redirects Bennu will help scientists to improve their models of other asteroids and their potential to impact Earth.

On top of all that, guiding OSIRIS-REx into orbit around Bennu will help NASA learn more about manipulating a spacecraft around small bodies.

"NASA's gotten very skilled at going to Mars, Saturn, through multibody systems," said NASA Chief Scientist Ellen Stofan. But smaller objects are different, and maneuvering OSIRIS-REx is a step toward landing humans on asteroids and the moons of Mars, she said.

Debris from the early solar system still floats between the planets. While most of the largest objects have been identified, NASA estimates that only half of the rocks the size of Bennu have been spotted.

"We've got to find them first before we can do anything about them," Johnson said.

For that, planetary defense researchers turn to NASA's NEOWISE, a repurposed telescope mission to identify near-Earth objects. The instrument has helped scientists to build a catalog of rocks near the planet, some passing closer than satellites.

Observation isn't the only tool for planetary defense. In partnership with the European Space Agency, NASA is working on the Double Asteroid Redirection Test (DART). The two agencies plan to send a spacecraft to rendezvous with an asteroid and its moon. By deliberately crashing into the tiny moonlet, DART will shift its course by "a fraction of a percent" according to NASA. The mission will test the ability of the space agencies to deflect an asteroid years before it collides with Earth.

Johnson described DART as "a kinetic impactor that would impact the moon of Didymos, which we affectionately call Didymoon."

Another upcoming project is planning to bring a boulder-size asteroid sample to the moon, where astronauts can remove samples to carry back to Earth. After traveling to an asteroid and selecting a hunk to take home, the Asteroid Redirect Mission (ARM) will attempt to change the path of the asteroid by using its mass as what Johnson called "a natural tug rope."

"Gravity will pull the asteroid off its natural orbit," he said.

Of course, NASA doesn't have a mission ready to deflect incoming danger. Johnson told Space.com that it will take somewhere from five to 10 years to launch a mission that will effectively deflect a specific threat.

Earth-threatening asteroids aren't prolific in the solar system. Johnson said that serious impacts that might be worth deflecting happen only about once every couple of centuries.

"It's not something I worry about a lot on a regular basis," he said.

But that doesn't mean we should become complacent.

"Since we don't know everything that's out there, it's something that could happen almost any day," he said.

He suggested that the best way to avert disaster is to improve the ability to identify potentially hazardous objects. The sooner large, dangerous objects are identified, the more time humans on Earth have to take the necessary steps.

"We need to improve our capabilities to detect and find them further out in space so we have time to prepare," he said.