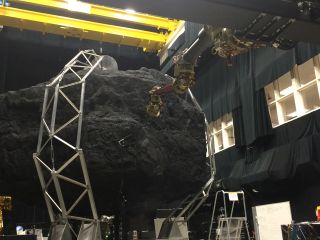 Researchers tested the robotic capture system that could pluck a boulder from an asteroid during NASA's proposed Asteroid Redirect Mission in a full-scale model at the agency's Goddard Space Flight Center in Maryland.
(Image: © NASA)

NASA's Asteroid Redirect Mission (ARM) has passed a key design milestone, bringing the project one step closer to snagging a boulder off an asteroid and pulling that piece into orbit around the moon.

The complex mission is currently targeted to launch in 2021, pegged at a cost of $1.4 billion, NASA said in a statement. After launch, the rocket will travel to a large near-Earth asteroid, collect a large boulder off of the asteroid's surface and pull that piece to the moon. Later, astronauts will travel to the boulder to extract and analyze samples. While orbiting the asteroid, the spacecraft can also tug the asteroid off-course using the craft's and boulder's combined gravity (as a proof-of-concept for deflecting a threatening body).

Now, the mission has passed a milestone called Key Decision Point-B (KDP-B) — formally approved Aug. 15 — and it will be able to move on to its Phase B planning stage. To pass, NASA officials "established the content, cost and schedule commitments for Phase B activities," NASA said in a statement. By the end of Phase B, ARM will have an approved baseline mission and design that meets all the agreed-upon requirements, in a process that all NASA missions pass through. [NASA to Pick Boulder Off an Asteroid (Animation)]

"This is an exciting milestone for the Asteroid Redirect Mission," NASA Associate Administrator Robert Lightfoot said in the statement. "Not only is ARM leveraging agency-wide capabilities, [but] it will [also] test a number of new technologies already in development."

The craft would spotlight an advanced electric-propulsion system, operate autonomously on the "low-gravity body" of the asteroid, and touch down on and lift off from the body — all key tests of technology that could be essential for human missions for Mars, NASA said. (Plus, the second part of the mission would feature spacewalking humans gathering samples, another activity relevant to Mars.)

Now that the mission is entering Phase B, NASA will call for proposals from aerospace companies for building mission components, and will work on partnering with other entities that want to fly payloads on the craft, NASA officials said in the statement. (There is cooperation under discussion with the Italian Space Agency in particular, they added.)

"Since its early formulation, NASA has invited mission-concept feedback and development ideas from the planetary science community, general public, U.S. and global industry, and international partners," Gates said. "With KDP-B under our belt, ARM can now move forward to define partnerships and opportunities for long-term engagement."

During Phase B, NASA will also put together an ARM investigation team that will analyze potential spacecraft and mission designs and conduct research to support the mission's development.

NASA will not have to choose a target asteroid until 2020, but in the meantime the agency has focused on 2008 EV5 as a reference. This 1,300-foot-wide (400 meters) asteroid orbits the sun every 343 days. Observations with radio telescopes suggest that the asteroid has boulders of a variety of sizes that ARM could choose from. The space rock also appears to host volatiles, water and organic compounds for the researchers to investigate once the boulder makes it closer to Earth.

ARM's original incarnation would have captured an entire smaller asteroid, but in 2015 NASA opted to instead pluck a boulder off of a larger body, avoiding the possibility of reaching a faraway asteroid only to realize it's too large to grapple. The procedure will also make it easier to test a "gravity tractor" procedure, in which the spacecraft and boulder are used to help drag the whole asteroid slightly off course.