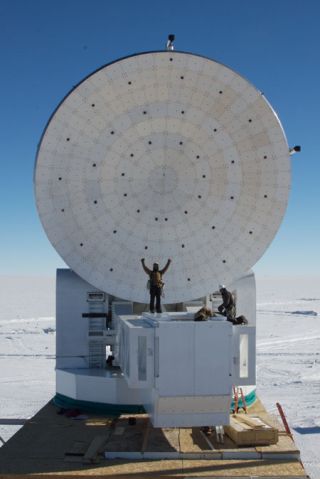 A telescope at the South Pole is being fine tuned to search for gravitywaves, hypothetical distortions of space-time that, if confirmed to exist,could further validate Einstein and reveal convincing evidence for a bigcosmology theory.

Cosmic inflation theory proposes that theearly universe passed through a phase of exponential expansion, ballooningalmost instantaneously from less than the size of an atom to about golf-ballsize.

The theory is widely accepted. It's tied up with the bigbang theory of how the universe started and predicts the existence ofgravity waves, as well as fluctuations in the density and temperature ofradiation left over from the big bang (called the cosmicmicrowave background, or CMB) and the mass density of the universe.However, unlike CMB and mass density observations, gravity waves have remainedelusive.

University of Chicago astrophysicist John Carlstrom and his colleaguesnow plan to place a new instrument on the South Pole Telescope to search forsignals of gravitational waves, taking delicate measurements of the CMB. Thetelescope already has been probing the CMB for dark energy, a repulsive forcethat pushes the universe apart and overwhelms gravity.

"We'll know in 10 years whether or not we can detect gravitationalwaves from inflation," Carlstrom said last week to a group of reporters atthe annual meeting of the American Association for the Advancement of Science,in Chicago.

Inflation theory predicts that gravitational waveswere imprinted on the CMB when space-time inflated. The waves travel at thespeed of light, but they are so weak that scientists expect to detect onlythose created during colossal cosmic events, such as black hole mergers. Alsothey have a wavelength that is hard to fathom ? almost the size of the visibleuniverse. The Laser Interferometer Gravitational Wave Observatory (LIGO) inLivingston, La., is one detector already designed to spot the elusive waves.

Einstein's theory of general relativity also predicted that shifts inlarge amounts of mass or energy would disrupt the fabric of space-time andgenerate regional ripples of gravitational radiation. They would beimperceptible to us. However, the gravitational radiation could also bedetected indirectly through its polarizing effect on the CMB.

Here is how it could work. Inflation theory predicts that quantum fluctuationsin the universe have been stretched out to cosmic sizes and became the seedsfor the large-scale structure of the universe.

Carlstrom's team is building a special instrument, a polarimeter, to beattached to the South Polar Telescope, to search for gravity waves. Thetelescope operates at submillimeter wavelengths, between microwaves andinfrared on the electromagnetic spectrum. The idea is to search for thesignature of gravitational waves in the CMB, which could be imprinted withpolarization as a result of the waves.

A European space mission called Planck, more sensitive than the missionthat found the cosmic microwave background, is set to launch in April, also inan effort to look for the polarization feature.

It's possible that inflationtheory is entirely wrong. So discovery of gravity waves would be a big dealand go a long way toward validating the theory, as well as the big bang andsome other big cosmological claims.

At the AAAS meeting, Arizona State University's Lawrence Krauss said hewas pessimistic about the potential for cosmology to make new discoveries,based on the expansion of the universe. However, the possible detection ofgravity waves excites him.

"The amazing thing about inflation is that it is completelyconsistent with what we see," he told reporters. "I think many peoplethink that what's been called a smoking gun of inflation is gravitationalwaves. It's a prediction of inflation that is ubiquitous. It's a generic thing.If these waves are discovered ? if we detect gravitational waves frominflation, there is a real possibility of pinning things down enough so thatone could perhaps convince every physicist that inflation happened."

Still it's hard to see how inflation theory could be wrong, said ScottDodelson, a University of Chicago physicist who also spoke with reporters atAAAS, because it explains so many observations. "Inflation allows anexplanation of many of those features which for right now, there is no otherexplanation," he said.

"We have these key components to our picture of the universe, butwe really don't know what physics produces any of them," he said,referring to inflation, dark energy and darkmatter ? the proposed stuff that makes up the universe's missing mass."The goal of the next decade is to identify the physics."