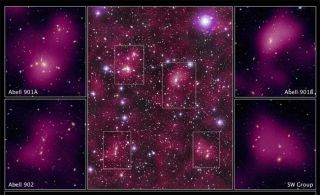 A new mapreveals dense pools of invisible matter tipping the scales at 10 trillion timesthe mass of the sun and housing a cosmic city of ancient galaxies.

Scientiststheorize that dark matter, considered to make up about 85 percent of the universe'smatter, acts as scaffolding on which galaxies mature. Asthe universe evolves, the tug from dark matter's gravitational field causesgalaxies to collide and swirl into superclusters.

It's allthese gravitational effects, from something that can't be seen, that indicatesdark matter exists.

Gray,Catherine Heymans of the University of British Columbia in Vancouver andcolleagues used NASA's Hubble Space Telescope to observe a supercluster calledAbell 901/902, which resides 2.6 billion light-years from Earth and spans morethan 16 million light-years across.

Theastrophysicists measured light from a backdrop of more than 60,000 galaxiesafter it passed through the supercluster and its dark matter. According to Einstein's generalrelativity theory, the presence of matter can bend spacetime, deflecting thepath of a light ray passing through the mass.

"Darkmatter leaves a signature in distant galaxies" explained study co-authorLudovic Van Waerbeke of the University of British Columbia. ?For example, acircular galaxy will become more distorted to resemble the shape of a banana ifits light passes near a dense region of dark matter.?

Byaveraging the shape-distortions from the thousands of galaxies, the researchersfound four pools of dark matter. And the invisible clumps matched up with thelocation of hundreds of ancient galaxies, which have experienced a violenthistory in their passage from the outskirts of the supercluster into thecentral hubs.

"Ifthe supercluster wasn?t there, you'd still see all of these galaxies in thebackground," Gray told SPACE.com. "But you put this massiveobject [in front of them] and your view gets distorted. It's a cosmic opticalillusion."

Thesurvey's broader goal is to understand how galaxies are influenced by theenvironment in which they live.

?The newmap of the underlying dark matter in the supercluster is one key piece of thispuzzle,? Gray said. ?At the same time, we?re looking in detail at the galaxiesthemselves.?

The galaxies in the central hubs, they are finding,show signs of aging, as they are elliptical, red in color and are no longerforming stars. Disk galaxies reside on the outskirts of the supercluster. Theseyouthful galaxies are blue-hued and buzzing with star birth.

It's theseyoung galaxies that constantly fall into the supercluster, adding to itsgalactic girth.

"Asthey come in, either they're interacting with each other more or they'reinteracting with the dark matter," Gray explained. "Something ishappening to change their properties."

The teamplans to study individual galaxies in an effort to understand how thissupercluster environment shapes and changes galaxies.