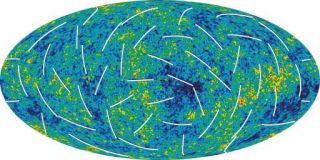 WMAP has produced a new, more detailed picture of the infant universe. Colors indicate "warmer" (red) and "cooler" (blue) spots. The white bars show the "polarization" direction of the oldest light. This new information helps to pinpoint when the first stars formed and provides new clues about events that transpired in the first trillionth of a second of the universe.
(Image: © NASA/WMAP)

Scientists announced today new evidence supporting the theory that the infant universe expanded from subatomic to astronomical size in a fraction of a second after its birth.

The finding is based on new results from NASA's Wilkinson Microwave Anisotropy Probe (WMAP) satellite, launched in 2001 to measure the temperature of radiant heat left over from the Big Bang, which is the theoretical beginning to the universe.

This radiation is known as the Cosmic Microwave Background (CMB), and it is the oldest light in the universe.

Using WMAP data, researchers announced in 2003 that they had pieced together a very detailed snapshot of the universe as it was about 400,000 years after the Big Bang, and that they had determined things like its age, composition and development.

The previous data showed that the universe was about 13.7 billion years old. It also revealed that it wasn't until about 200 million years after the Big Bang that conditions were cool enough for the first stars to form. Scientists were also able to conclude that the universe is composed of about 4 percent real matter, about 23 percent dark matter, and about 73 percent dark energy. Nobody actually knows what dark matter or dark energy are, however.

The new WMAP observations, announced at a NASA press conference today, reveal what the universe was like in the first trillionth of a second after the Big Bang. From the microwave background, researchers teased out a new signal called the "polarization signal."

"This new signal is roughly 100 times weaker than the signal we analyzed three years ago and about a billion times less than the radiant warmth we feel from the Sun," said Lyman Page, a WMAP team member from Princeton University.

The researchers collected observations of this polarization signal to create a map of the early universe, allowing them to test a sub-theory within the Big Bang theory, called "inflation."

"During this growth spurt, a tiny region, likely no larger than a marble, grew in a trillionth of a second to become larger than the visible universe," said WMAP researcher David Spergel, also from Princeton University.

The new observations reveal that the early expansion wasn't smooth, with some regions expanding faster than others.

These fluctuations are thought to have led to clumping of matter that allowed the formation of galaxies.

Brian Greene, a physicist from Columbia University who wasn't involved in the research, called the new findings "spectacular" and "stunning."

"A major question that people have asked for decades is where do stars and galaxies come from? The answer coming from WMAP data supports the idea that quantum fluctuations are the answer," Greene said. "WMAP's data supports the notion that galaxies are nothing but quantum mechanism writ large across the sky."

The new findings brings humanity closer to answering one of its oldest questions, that of where we come from, Greene said.

"WMAP certainly doesn't answer this question, but its data is taking us one giant step closer to the answer by giving us a precise quantitative look at the universe's earliest fraction of a second," Greene said. "It's a tiny window of time, but it's a critical one in our quest to learn what happened at time zero itself."

The new findings have been submitted to Astrophysical Journal.