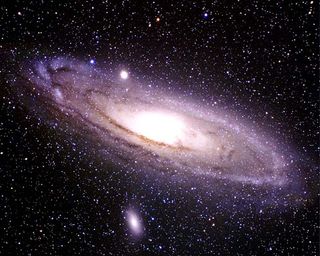 Astronomers have determined the density and speed of dark matter in our corner of the universe.

The finding helps bring dark matter out of the realm of the hypothetical and places scientists a few steps to closer figuring out what this invisible stuff that pervades the universe and holds galaxies together is made of. It also settles once and for all the question of which galaxy--our Milky Way or Andromeda--is more massive.

The winner: The Milky Way.

Researchers used the Very Large Telescope in Chile to observe 12 dwarf galaxies as they orbited around our Milky Way. The researchers traced the satellite galaxies' movements in three dimensions. By doing so, they were able to weigh the galaxies very precisely and calculate how much dark matter is holding them together.

"It's important to note this stuff is not hydrogen atoms, it's just how much it weighs," said study team leader Gerry Gilmore from the University of Cambridge.

This surprisingly low density means that the smallest possible volume of space that dark matter can occupy is a cube measuring 1,000 light years across with 30 million times the mass of the Sun.

Scientists think that large galaxies are built lego-style through the combination of these blocks of dark matter and the stars they contain.

By knowing the minimum volume that dark matter can occupy, the researchers were able to calculate other physical properties of dark matter. One of these properties was speed, which turned out to be about 6 miles per second (9km/s).

"That's about a million times faster than predictions," Gilmore said in a telephone interview.

The researchers also calculated dark matter's "temperature"--or at least, the temperature dark matter would have if it gave off heat like ordinary matter. One of the difficulties about studying dark matter, of course, is that it emits no light and gives off no radiation, including heat.

If dark matter were made of hydrogen atoms, it would have a temperature of about 18,000 degrees Fahrenheit (10,000 C)--or hotter than the surface of the Sun.

This temperature is much warmer than scientists had expected. Other theories predicted that dark matter particles were relatively sluggish and that their temperature might be as low as 1 degree Celsius.

The research also settles an old debate among astronomers about which galaxy, our Milky Way or Andromeda, is more massive. The detailed study of the dwarf galaxies allowed the researchers to weigh our own galaxy more precisely than ever before.

"We are almost exactly twice as massive as Andromeda," Gilmore said.

The discovery was made by Mark Wilkinson, another team member in the study. Andromeda is still believed to be bigger and have many more stars than the Milky Way--possibly because it swallowed up a bunch of smaller galaxies--but it has slightly less dark matter.

Scientists still have a long way to go before they figure out what dark matter is, but the new findings could help narrow the possibilities, Gilmore said.

Axions are believed to have a very small mass and to have been created in large quantities during the Big Bang. Gilmore said the new results seem to favor axions as making up dark matter, but it might also be that dark matter is made up of a variety of particles.

The study will be detailed in a leading astrophysics journal in the next few weeks.