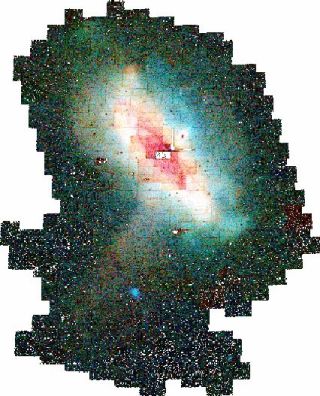 The extended stellar disk has gone undetected in the past because the stars that appear in the region of the disk could not be known to be a part of the disk until their motions were calculated. In addition, the inhomogenous "fuzz" that makes up the extended disk does not look like a disk - it appears to be a fragmented, messy halo built up from many previous galaxies crashing into Andromeda, and it was assumed that stars in this region would be going every which way.
(Image: © Scott Chapman, Caltech)

MINNEAPOLIS, MN - We know less about our nearest galactic neighbor than thought, astronomers announced today. A map of the outer suburbs of the Andromeda galaxy finds that its rotating disk of stars is three times bigger than previously measured.

The Andromeda galaxy is a spiral galaxy similar to our own Milky Way. Although there are smaller dwarf galaxies nearer to us, Andromeda is the closest large galaxy - at about 2 million light-years from Earth. A light-year is the distance light travels in a year, about 6 trillion miles (10 trillion kilometers).

Under dark skies, Andromeda can be seen by the naked eye as a large fuzzy blob.

Scott Chapman from the California Institute of Technology presented the results of a survey of Andromeda's stellar motions here at the 206th Meeting of the American Astronomical Society.

"What we have done is measured the radial velocity of stars in the outer regions - basically, how fast they are moving towards us or away from us," Chapman said during a press conference this morning.

Chapman was one of a team of astronomers using the Keck telescope to measure speeds of 5,000 stars in the outskirts of Andromeda. They were surprised to find that these suburban stars were actually rotating as if they were part of the galaxy's disk. Their paths had been expected to be more random.

"Finding all these stars in an orderly rotation was the last explanation anyone would think of," Chapman said.

The implication is that the disk is 220,000 light years in diameter, instead of the earlier estimates of 70,000 to 80,000 light years. In our sky, that means Andromeda stretches out over the length of 12 full Moons.

This periphery of Andromeda is faint - it accounts for about 10 percent of the light from the galaxy. Still, there are millions of stars presumably orbiting in this outer region

By looking at separate components of a galaxy one can try to piece together how the galaxy built up over time. The central region of a spiral galaxy is believed to have formed first, with the rotating disk coming later. The type and orbit of stars in certain regions provides a kind of fossil record for the evolutionary history.

Andromeda is an "ideal laboratory" because it is so close, and yet it is outside our galaxy.

"It is very hard to study this evolution in our own galaxy because we are stuck in the middle of it," Chapman said.

And yet this laboratory is full of puzzles as to how it came to be. Besides Andromeda's new size, the researchers are scratching their heads over the fact that the outer rotating stars are arranged into about 20 identifiable clumps. This would imply that they formed out of the merger of smaller galaxies with the main galaxy.

But rotating disks and clumps are not compatible in galaxy formation models.

"This giant disk discovery will be hard to reconcile with computer simulations of forming galaxies," said Rodrigo Ibata of the Observatoire Astronomique de Strasbourg in France. "You just don't get giant rotating disks from the accretion of small galaxy fragments."

Chapman said that if a merger is the correct explanation, it would have had to occur relatively recently - within the last 200 million years. Otherwise, the clumps should have been "washed out." We may, therefore, being viewing our big neighbor at a rare moment in its history - right after it has gobbled up one of its little neighbors.