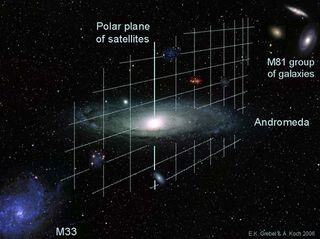 Artist's conception of the polar plane of satellite galaxies around Andromeda. The plane passes perpendicularly through the center of Andromed and points towards M33 and M81.
(Image: © E.K. Grebel/A. Koch)

An unusually high number of galaxies are aligned along a single plane running through the center of the giant Andromeda galaxy. Scientists don't have a theory to explain why.

Galactic cannibalism or dark matter may be responsible, researchers say.

Using the Hubble Space Telescope, Eva Grebel and Andrew Koch from the University of Basel in Switzerland found that nine out of Andromeda's fourteen dwarf galaxy satellites reside in a single plane. The plane is about 52,000 light-years wide and is aligned perpendicular to Andromeda's own galactic plane, within which the galaxy's stars orbit about the center.

That nearly 80 percent of Andromeda's satellite galaxy mass is located within a single plane is highly unusual and can't be accounted for by traditional theories of galaxy formation, Grebel said.

The finding was announced recently at a meeting of the American Astronomical Society.

The Milky Way was found to contain two similar planes of satellite galaxies in the late 1980s, but with nothing to compare them to, astronomers couldn't tell if such planes were a general property of galaxy formation or whether they were just a statistical fluke.

"One of the open questions was always 'Do such planes of satellite galaxies exist around other galaxies?'" Grebel said. "If they do, it might indicate that it's more than just chance."

The researchers aren't sure what might be responsible for the strange alignment but they offered two possible scenarios.

Perhaps long ago Andromeda swallowed a nearby orbiting galaxy but did a messy job of it; the galactic crumbs from that meal became Andromeda's satellite dwarf galaxies. Such instances of galactic cannibalism are common and are believed to play a major role in galaxy formation.

"If this scenario were correct, we would expect these satellites to maintain the original orbit from the original galaxy form which they came," Grebel explained. Early results from computer models suggest that such a scenario is physically possible.

But it might be several years before this hypothesis can be confirmed, since accurate orbital measurements for Andromeda's satellite galaxies are extremely difficult due to their distance, she added.

Another intriguing possibility is that the satellite galaxies are actually embedded in a stream of hypothetical dark matter flowing between two massive objects.

It could be that the satellite galaxies are gravitationally attracted to these streams of dark matter and clumping around them, giving the appearance of being aligned along a single, wide plane.

Grebel stressed that at this point, both of these scenarios are just speculation.

"We have no proof whether any of these is actually true," she said.

It may turn out that the alignment is due to chance after all or that another explanation entirely may be responsible.

Michael Turner, a cosmologist at the University of Chicago who was not involved in the study, found the results intriguing.

"It's getting at this very simple question: how did our backyard get assembled?" Turner said.