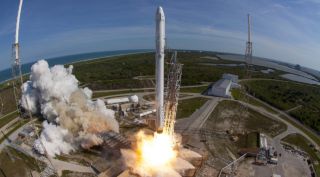 SpaceX will attempt to land its Falcon 9 rocket during the launch of a cargo mission toward the International Space Station early Monday morning (July 18), and you can watch all the action live.

SpaceX's two-stage Falcon 9 rocket is scheduled to lift off from Cape Canaveral Air Force Station in Florida at 12:45 a.m. EDT (0445 GMT) Monday with the company's robotic Dragon cargo capsule aboard. About 10 minutes later, the booster's first stage will try to touch down softly back at Cape Canaveral. You can watch the launch and landing live here, courtesy of NASA TV, beginning at 11:30 p.m. EDT Sunday (July 17; 0330 GMT Monday).

The landing try — which will come as the Falcon 9's second stage continues carrying Dragon to orbit — is part of SpaceX's effort to develop fully and rapidly reusable rockets, a technology that company founder and CEO Elon Musk has said should slash the cost of spaceflight. [Reusable Rocket Launch Systems: How They Work (Infographic)]

SpaceX has already pulled off four rocket landings during orbital launches. The first occurred at Cape Canaveral in December; the other three times (once in April and twice in May), Falcon 9 first stages touched down on a robotic "drone ship" in the Atlantic Ocean.

SpaceX would ideally like to bring all its rockets back to terra firma at or near the launch site, to speed up the inspection and re-flight processes. But boosters that blast payloads toward distant destinations — such as geostationary orbit, which lies about 22,300 miles (35,890 kilometers) from Earth's surface — generally cannot carry enough fuel to make it all the way back, which explains the need for the drone ships. (SpaceX has two, which are named "Just Read the Instructions" and "Of Course I Still Love You.")

The International Space Station (ISS) flies in low Earth orbit, at an altitude of just 250 miles (400 km), so Cape Canaveral is the landing target for the Falcon 9 tonight — and the chances of success are pretty good, SpaceX representatives said.

"I'm pretty optimistic at this point in time that we land it, but I would always knock on wood," Hans Koenigsmann, vice president of flight reliability at SpaceX, said during a prelaunch news conference Saturday (July 16). "That's part of the nature of this maneuver — it's pretty challenging."

The landing is a secondary objective, however; the main goal of the Falcon 9 launch is to send Dragon on its way to the ISS. The capsule is loaded up with about 3,800 lbs. (1,700 kilograms) of supplies and scientific experiments, as well as a crucial docking adapter that will allow future crewed spacecraft to hook up more easily with the orbiting lab.

Dragon is scheduled to arrive at the ISS early Wednesday morning (July 20), at which time astronauts will grapple the capsule using the orbiting lab's huge robotic arm.

Another robotic cargo vessel, Russia's Progress freighter, is slated to dock with the ISS Monday night after a two-day flight.