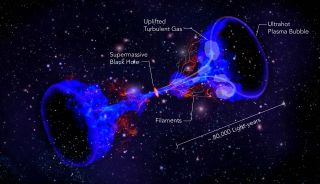 This image illustrates how supermassive black holes at the center of galaxy clusters could heat intergalactic gas, preventing it from cooling and forming stars. The black hole inflates bubbles (dark areas) of ultrahot, ionized gas, called plasma. The bubbles, which reach tens of thousands of light-years into space, drag gas (blue clouds) from the cluster center, which explains the long streaks of gas, or filaments, seen in optical images. In the outer regions, the bubbles cause turbulence, which heats the gas. The hot gas emits bright X-rays detected by X-ray satellites.
(Image: © SLAC National Accelerator Laboratory)

Like a confectioner trying to reach the right consistency in a sweet concoction, a supermassive black hole is vigorously stirring the gas within a collection of galaxies to keep star formation at a minimum. The new finding, revealed by the doomed spacecraft Hitomi, may help solve the question of why so few stars form within collections of hundreds or thousands of galaxies.

Hitomi measured the motion of gas in the center of the the Perseus galaxy cluster with unprecedented precision, as much as 50 times better than previous instruments, said Andrew Fabian, a professor of astronomy at the University of Cambridge in England. The black hole, by stirring the gas, keeps the material from cooling down and forming new stars.

Without that mixing activity from the black hole, "the central galaxy would be much brighter and have a much higher stellar mass," Fabian told Space.com by email. Fabian is chairperson of part of Hitomi's science working group, an international collaboration headed by the Japan Aerospace Exploration Agency (JAXA). That group published the results of the only science completed by the HItomi spacecraft before it disintegrated in orbit last April. [Images: Black Holes of the Universe]

"We already knew that supermassive black holes, which are found at the center of all galaxy clusters and are tens of billions of times more massive than the sun, could play a major role in keeping the gas from cooling by somehow injecting energy into it," Norbert Werner, a research associate at Stanford University in California who analyzed data from Hitomi, said in a statement. "Now we understand this mechanism better and see that there is just the right amount of stirring motion to produce enough heat."

Galaxy clusters are made up of anywhere from 50 to thousands of galaxies. Hot gas reaching tens of millions of degrees Fahrenheit makes up about 15 percent of a cluster, causing it to shine brightly in the X-ray spectrum. Studying the gas helps astronomers make estimates of how massive the cluster is, but these estimates can change based on how quickly the gas is stirred, a process that can also affect the birth of stars.

Other instruments have studied the Perseus cluster, the brightest X-ray cluster in the sky, and one of the most massive. These glimpses revealed enormous bubbles of gas thousands of light-years wide, spat out by the supermassive black hole at the center of the cluster.

For the first time, Hitomi was able to link the movement of the gas to the bubbles. As they rise from the black hole, the bubbles drag gas from the center of the cluster, stirring it up and heating it. Because the gas can't cool, it is unable to form new stars. (Visible-light images reveal streaks of colder gas pulled away from the galactic center).

"Although the motions heat the gas at the center of the Perseus cluster, their speed is only about 100 miles [160 kilometers] per second, which is surprisingly slow considering how disturbed the region looks in X-ray images," Hitomi's co-principal investigator Roger Blandford, a physics professor at Stanford University and a professor of astrophysics and particle physics at the Department of Energy's SLAC National Accelerator Laboratory.

While understanding how the gas moves can affect estimates of mass in the cluster, Blandford said the new measurements haven't led to significant changes in previous mass calculations.

Unfortunately, Hitomi was able to study the Perseus cluster only briefly before the satellite was lost.

Due to the spacecraft failure, "We are not able to make these measurements in other clusters and galaxies and so understand better how the feedback process operates," Fabian said.

The research, along with an accompanying perspective piece, was published online today (July 6) in the journal Nature.

Launched in February 2016, Hitomi carried an X-ray detector that was designed to spot objects 10 to 100 times fainter than those visible to previous spacecraft, according to JAXA. By probing high-energy objects such as black holes, galaxy clusters and supernova remnants from space, Hitomi was able to observe in X-ray and gamma-ray wavelengths that can't make it through Earth's atmosphere.

But after a little more than a month in space, a glitch resulted in Hitomi spinning wildly out of control. The high-speed rotation caused several pieces of the satellite to snap off, permanently disabling the spacecraft. As many as 11 fragments were detected flying through space. By the end of April, JAXA ended its efforts to reconnect to the spacecraft, well before the end of what was supposed to be a three-year mission.

Despite its early destruction, Hitomi managed to perform significant science. In its first week after launch, the spacecraft spent three days observing the Perseus cluster, making a total of four observations. Hitomi began its fateful position change before the craft had completed all of the studies that researchers had intended it to make.

"Eventually, it would have mapped much of the cluster over a total of a month or more, and much longer on many other clusters," Fabian said.

He told Space.com that only a handful of other sources were observed for calibration purposes, and these would be "much less interesting scientifically."

"Being able to measure gas motions is a major advance in understanding the dynamic behavior of galaxy clusters and its ties to cosmic evolution," study co-author Irina Zhuravleva of the Kavli Institute for Particle Astrophysics and Cosmology, said in the same statement from SLAC National Accelerator Laboratory. "Although the Hitomi mission ended tragically after a very short period of time, it's fair to say that it has opened a new chapter in X-ray astronomy."