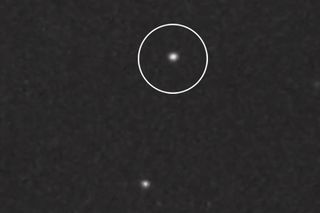 The Japan Aerospace Exploration Agency (JAXA) is struggling to understand exactly what went wrong with its brand-new astronomy satellite, Hitomi, which suffered some sort of malfunction over the weekend and is apparently tumbling in space, according to a video captured by an amateur astronomer.

You can track Hitomi on our Satellite Tracker, powered by N2YO, to find out when the craft may be visible from your area.

Amateur astronomers and satellite trackers, meanwhile, are following Hitomi's plight using ground-based telescopes. One video, captured by Paul Maley in Arizona, shows the satellite's brightness flaring up, then dimming, as the craft moves across the sky. Maley told National Geographic's Nadia Drake that his video — which first appeared on Drake's NatGeo blog No Place Like Home — suggests the satellite is tumbling in space.

"Because the orbit of Hitomi is quite stable it is relatively easy to track. In fact, if the sky clears up I will be attempting additional video beginning tonight," Maley told Space.com in an email today, adding that he will be watching for any changes in its rotation. "So far, it remains unchanged at a bit over 10 seconds between major flashes. These peak flashes can reach + 3 magnitude (or slightly dimmer than the North Star) but are brief. Between these major flashes there are minor ones but the satellite is also invisible during each major flash cycle as well. My video does reveal that."

According to JAXA's latest update, the Hitomi satellite, which launched in February, separated into multiple pieces at around 10:42 a.m. EDT (1442 GMT) March 26. JAXA detected two short flashes of signal 2.5 hours apart over the night of March 28-29, from the Santiago Tracking Station in Chile.

"JAXA has not been able to figure out the state of its health, as the time frames for receiving the signals were very short," JAXA officials said in the statement. [Japan's Hitomi X-Ray Astronomy Satellite Explained (Infographic)]

The U.S. Strategic Command's Joint Space Operations Center (JSpOC) reported that on Sunday (March 27), it detected five pieces of debris associated with the satellite. Then amateur observers like Maley noted flashes of light coming from the satellite at a regular interval, suggesting that the craft was spinning.

JAXA's own radar, at the Kamisaibara Space Guard Center, has detected two objects near the satellite's original orbit, and Japan Space Forum's Bisei Space Guard Center telescope has seen one of them. The organization "continues to investigate the relationship between the information announced by JSpOC and the communication anomaly," officials said.

"JAXA will continue to do its best to recover communications with Hitomi and investigate the cause of the anomaly," they added.

Hitomi, also known as ASTRO-H, launched Feb. 17 to simultaneously observe regions of the sky in the X-ray and gamma-ray registers. The craft was 46 feet (14 meters) long when deployed and weighed 6,000 lbs. (2.7 metric tons). It is intended to investigate the evolution and large-scale structure of the universe, dark matter distribution, how matter behaves in high-gravity areas like black holes and other high-energy phenomena, JAXA wrote on the telescope's website.