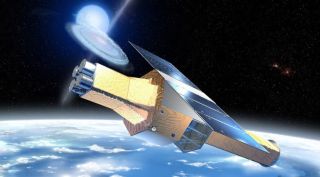 Ilustration of the Hitomi x-ray astronomy satellite, launched by JAXA Feb. 17 with instruments from NASA and other space agencies.
(Image: © JAXA/Akihiro Ikeshita)

In a March 27 statement, JAXA said it lost communications with the Hitomi satellite at 3:40 a.m. Eastern March 26. "Up to now, JAXA has not been able to figure out the state of health of the satellite," the agency said in the statement.

"We are still trying to recover communication with 'Hitomi', and trying to find out the status and causes of this communication failure," JAXA said in a tweet early March 28, the latest update provided by the agency on the status of recovery efforts. [Japan's Hitomi X-ray Astronomy Satellite Explained (Infographic)]

That loss of communications coincided with the detection of debris in the vicinity of the spacecraft. The U.S. Strategic Command's Joint Space Operations Center, or JSpOC, said March 27 it was tracking five pieces of debris associated with Hitomi created at about 4:20 a.m. Eastern March 26.

While JSpOC classified this event as a "breakup," the satellite appears to still be mostly intact, although damaged. JAXA noted that it "received short signals from Hitomi" after the time JSpOC reported for the breakup, but did not indicate exactly when it received the signals or any information they provided about the status of the spacecraft.

Amateur satellite observers, observing Hitomi from the ground, reported on a mailing list late March 27 seeing flashes from the satellite with a period of 5 to 10 seconds. Those flashes suggest that the spacecraft, which is normally three-axis stabilized, is spinning.

Neither JAXA nor JSpOC have speculated on the cause of the malfunction and breakup, which could be due to either a technical problem with the satellite itself or a collision with a micrometeorite or piece of orbital debris.

JAXA launched Hitomi, originally known as Astro-H, on an H-2A rocket Feb. 17. The 2,700-kilogram satellite carries several instruments to perform x-ray astronomy observations. Some of the spacecraft's instruments were provided by NASA, the European Space Agency and the Canadian Space Agency. The spacecraft was in the middle of a three-month checkout and instrument calibration phase when the malfunction took place.