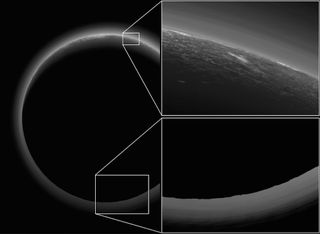 This backlit Pluto photo was captured on July 14, 2015 by NASA’s New Horizons probe, shortly after its closest approach to the dwarf planet. Mountains, ice plains and a possible cloud are visible in the sunlit portion of the photo (top inset), while rugged topography is apparent on Pluto’s dark side (bottom inset).
(Image: © NASA/JHUAPL/SwRI)

A spectacular new image of Pluto shows rugged mountains, nitrogen-ice plains and, perhaps, a big cloud scudding through the dwarf planet's exotic skies. NASA even described the view as the "twilight zone" of Pluto.

NASA's New Horizons spacecraft captured the photo shortly after its closest approach to Pluto on July 14, 2015, when the sun was on the other side of the dwarf planet from the probe's perspective.

In the backlit twilight view, sunlight filters through Pluto's many-layered atmosphere and lights up certain features, including the towering Norgay Montes mountain range and the vast plain known as Sputnik Planum, whose surface is likely renewed every 500,000 years or so by churning convective processes.

Also illuminated is a bright wisp tens of miles across "that may be a discrete, low-lying cloud in Pluto's atmosphere; if so, it would be the only one yet identified in New Horizons imagery," NASA officials wrote in a photo description Thursday (June 2) that dubbed the image Pluto's "twilight zone." "Atmospheric models suggest that methane clouds can occasionally form in Pluto's atmosphere."

These features — mountains, plains and possible cloud — all lie in a sliver of sunlight, at the top limb of Pluto. But intriguing landscape details are also visible near the bottom of the photo, which depicts Pluto's night side.

New Horizons took the newly released photo with its Ralph/Multispectral Visual Imaging Camera about 19 minutes after closest Pluto approach, from a distance of about 13,400 miles (21,550 km). (Closest approach brought the probe within 7,800 miles, or 12,550 km, of the dwarf planet's surface.)

The photo features a resolution of about 1,400 feet (430 meters) per pixel, NASA officials said.

New Horizons is still beaming flyby data home, and will continue to do so through this coming fall. (The probe is currently about 3.2 billion miles, or 5.15 billion km, from Earth; such a vast distance makes transmission rates slow, due to the significant weakening of New Horizons' radio signal.)

The spacecraft is currently zooming toward a small object called 2014 MU69, which lies about 1 billion miles (1.6 billion km) beyond Pluto. If NASA approves and funds a proposed extended mission, New Horizons will study 2014 MU69 up close on Jan. 1, 2019.