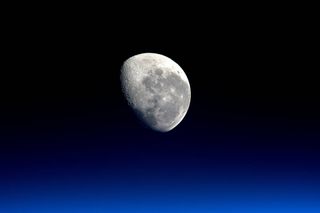 An image of moonset from the International Space Station taken by British astronaut Tim Peake on March 28, 2015, sets the lunar body against a deep blue backdrop.
(Image: © ESA/NASA)

The setting moon is simply magnificent in this stunning snapshot by British astronaut Tim Peake of the European Space Agency, who captured the view from a window on the International Space Station.

Peake snapped the photo on March 28, and was actually looking for Antarctica at the time. Despite the southern continent's size, it turned out to be a tough target. But catching dazzling moonset instead, it seems, was an acceptable consolation prize Peake. You can see more of Peake's amazing photos from space here.

Peake launched to the International Space Station in December 2015 and is currently one of six crewmembers living aboard the station. He is the first British crewmember of the space station and will return to Earth in June. In addition to Peake, the station's crew includes two Americans and three Russian cosmonauts.