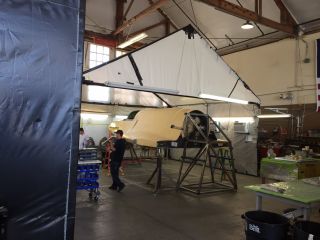 The prototype version of XCOR's Lynx space plane is seen here under construction at the company's headquarters in Mojave, California, on Feb. 19, 2016.
(Image: © Mike Wall/Space.com)

As Virgin Galactic rolled out its brand-new SpaceShipTwo during a grand gala in Mojave, California, earlier this year, another private spacecraft was coming together virtually next door, with much less fanfare.

That other vehicle is the Lynx rocket plane, a reusable spacecraft being built by XCOR Aerospace. Like SpaceShipTwo, Lynx is designed to carry paying customers and scientific payloads to suborbital space and back.

The Lynx currently under construction is a prototype, and it was a wingless shell when Space.com dropped by XCOR's Mojave headquarters on Feb. 19 — the same day that Virgin unveiled its shiny new SpaceShipTwo, dubbed "Unity," at a hangar just down the road. [Watch: Inside XCOR: Our Exclusive Video Tour]

But Lynx's four-engine propulsion system is nearly ready to go, and the prototype could conceivably take to the skies for the first time in early 2017, Harry van Hulten, XCOR's director of flight testing and one of two test pilots for the company, told Space.com.

"I hope those guys are successful," van Hulten said, referring to Virgin Galactic. "We hope to follow in their footsteps."

Lynx has seats for one pilot and one paying passenger. The vehicle will take off and land horizontally on a runway, like an airplane. But it will go much higher than any commercial jet, reaching a maximum altitude of about 64 miles (103 kilometers). [How XCOR's Lynx Rocket Plane Works (Infographic)]

During an operational flight, Lynx's four rocket engines will fire for about 4 minutes, blasting the craft up to suborbital space. The pilot and passenger will be exposed to a maximum of 4 G's of acceleration for about 30 seconds, van Hulten said. (One G is the standard force felt at Earth's surface. Apollo astronauts endured between 3.3 and 7.2 G's of maximum force during their capsules' re-entry to Earth's atmosphere, according to NASA records.)

"After that, we're a glider," van Hulten said.

Lynx passengers will see the curvature of the Earth against the blackness of space, and they'll experience 4 to 5 minutes of weightlessness during their hour-long flight.

The overall experience will be similar, but not identical, to the one offered by SpaceShipTwo. Virgin Galactic's vehicle is also a suborbital space plane that lands on a runway, but it will blast off in midair, after being released by a carrier aircraft.

SpaceShipTwo can seat six passengers, and it will stay aloft for about 2.5 hours on a typical flight. And SpaceShipTwo tickets are more expensive — $250,000, compared to $150,000 for Lynx. (To date, about 700 people have reserved a SpaceShipTwo seat, Virgin Galactic representatives have said; 350 people have bought a ticket to ride Lynx, van Hulten told Space.com.)

XCOR and Virgin Galactic aren't the only companies in the suborbital spaceflight game. Blue Origin, which is run by Amazon.com founder Jeff Bezos, has developed its own crew-carrying system — a reusable six-passenger capsule and rocket named New Shepard. This system has already flown to suborbital space and back three times on uncrewed test flights, the most recent of which occurred Saturday (April 2). [Blue Origin Launch Photos: New Shepard's 3rd Test Flight]

Space tourism isn't the only anticipated business for Lynx, SpaceShipTwo or New Shepard; all three vehicles are designed to accommodate scientific payloads as well.

Lynx will carry experiments to suborbital space and back, helping scientists gauge how brief exposure to microgravity conditions and/or increased radiation levels affect a variety of biological processes, chemical reactions and other phenomena, XCOR officials have said.

But the space plane may also end up deploying scientific gear, van Hulten said — ejecting sensors into Earth's atmosphere to gather meteorological data, for example, and, further in the future, perhaps even launching small satellites into orbit.

"That gives us a suborbital spaceship that can do multiple missions," van Hulten said.

And there should be many opportunities to collect data, if all goes according to plan. Lynx's relightable, reusable rocket engines should eventually allow the space plane to fly four missions per day, said van Hulten.

Lynx isn't ready to take off just yet, and there will still be a lot of work to do even after the prototype gets off the ground: The Lynx currently under construction is designed to reach a maximum altitude of just 38 miles (61 km) or so, van Hulten said. (SpaceShipTwo, by contrast, is already in the flight-test phase, though progress was slowed considerably by the tragic October 2014 accident that killed co-pilot Michael Alsbury and injured pilot Peter Siebold. Indeed, Unity was built to replace the vehicle destroyed in that crash, which was known as Enterprise.)

But van Hulten and other XCOR personnel are confident that the company can help open up the space frontier — and their vision doesn't stop with Lynx or the suborbital realm.

"Our goal is to make space accessible," van Hulten said. "After Lynx, we want to go orbital. But that's far ahead on the horizon."