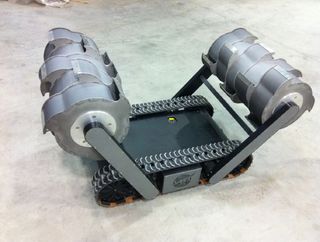 One of the technologies in the "Space Race" is the Regolith Advanced Surface Systems Operations Robot (RASSOR) excavator, which could mine for resources from hard-to-reach Earth mines, a moon or an asteroid.
(Image: © NASA)

A new NASA program rewards tech companies for building machines destined for Earth orbit — or even the moon.

Dubbed "Startup NASA," the new program will make it easier for young companies to commercialize NASA technology by helping them with their cash flow and securing intellectual property.

Until March 27, Startup NASA's "Space Race" competition will accept new entrants, who will have access to as much as $1.2 million in private capital from an unnamed, committed fund. NASA is running the competition in partnership with the Center for Advancing Innovation.

Entrants can choose one of 10 NASA technologies, and then create a pathway for commercialization. One invention to be commercialized is the Regolith Advanced Surface Systems Operations Robot (RASSOR) excavator, which is designed to extract minerals and resources from Earth mines, the moon or an asteroid.

"In the past four years, we've managed a 250 percent increase in annual patent licensing and have doubled the rate at which we release software to the public," Daniel Lockney, executive of Startup NASA, said in a statement.

"Startup NASA and the Space Race challenge promise to continue that trend of making NASA's achievements in research and technology more accessible to people on the ground."

Similar to the minispeeches from entrepreneurs you see on the TV show "Shark Tank," the companies will each create an elevator pitch for potential investors. Competitors who pass the first stage will write a full business plan, NASA officials said. The final presentations will be evaluated by judges, who then will select which entrants will license the technology and incorporate their businesses. (After that, they'd ideally develop and commercialize their product.)

"The challenge provides robust training in business fundamentals, as well as mentorship from world-renowned industry experts," NASA officials said in the statement. "Competitors also will receive unique networking opportunities and media exposure as they vie for prize purses of $2,500."

In exchange for licensing technology from NASA, the companies will not be charged any minimum fees or up-front costs for three years. More than 12 companies have signed up for Startup NASA since it began in October.