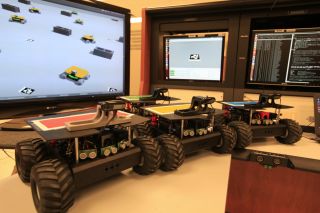 The self-driving swarmie robots could be used to search alien surfaces one day.
(Image: © NASA/Dmitri Gerondidakis)

They may look like remote-controlled toy trucks, but a troop of new NASA robots could one day race across distant planets as a sort of space exploration vanguard.

The autonomous robots, which engineers have dubbed "swarmies," are much smaller than other NASA robots like the Mars rover Curiosity. Each comes equipped with a webcam, Wi-Fi antenna, and GPS system for navigation.

The swarmies function in a way similar to an ant colony. When one ant stumbles across a food source, it sends out a signal to the rest of the colony, and then the ants work together to cart the food back to the nest. Engineers from NASA's Kennedy Space Center in Florida developed software that directs the swarmies to fan out in different directions and search for a specific, predetermined material, like ice-water on Mars. Once one of the rovers finds something interesting, it can use radio communication to call its robotic brethren over to help collect samples. [Photos: Top 10 Space Robot 'Selfies']

"For a while people were interested in putting as much smarts and capability as they could on their one robot," Kurt Leucht, one of the engineers working on the project, said in a statement. "Now people are realizing you can have much smaller, much simpler robots that can work together and achieve a task. One of them can roll over and die and it's not the end of the mission because the others can still accomplish the task."

Working out a way to send humans on lunar or Martian exploration missions is complicated and expensive and those kinds of missions are likely still a long way off. Sending robots is an easier alternative, and NASA is working on a whole new generation of autonomous robotic explorers. NASA engineers have already dreamed up slithering snake-like robots that could explore Mars and deep-diving robots that could explore the oceans of Jupiter's moon Europa.

The swarmie tests are still in the preliminary stages, and NASA engineers are only driving the swarmies around the parking lots surrounding Kennedy's Launch Control Center. Right now the robots are only programmed to hunt for barcoded slips of paper. Over the next few months, swarmie tests will also include RASSOR — a mining robot specially designed to dig into alien surfaces and search for interesting or valuable materials. The test will determine how well the swarming software translates to control other robotic vehicles.

Swarmies might also find a use on Earth, NASA officials said. The robots could aid in rescue missions following natural disasters or building collapses, crashes and other wreckage sites. The robots would also make perfect pipeline inspectors.

"This would give you something smaller and cheaper that could always be running up and down the length of the pipeline so you would always know the health of your pipelines," Cheryle Mako, a NASA engineer who is leading the project, said in a statement. "If we had small swarming robots that had a couple sensors and knew what they were looking for, you could send them out to a leak site and find which area was at greatest risk."