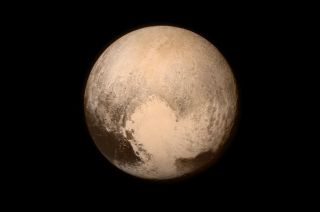 When we think of people who have made a contribution of scientific or historical import, we usually do not think of kids. Yet this column celebrates the accomplishments of two very young people who made quite a mark.

Sunday (March 13) marks the 86th anniversary of the discovery of Pluto, which was once considered the ninth and most distant planet, but was reclassified as a "dwarf planet" by the International Astronomical Union in 2006.

One of the two youngsters played a significant role in the christening of that newly discovered (in 1930) heavenly body. [Photos of Pluto and Its Moons]

The girl who named Pluto

The privilege of naming this newfound object presumably belonged to Lowell Observatory, which is located in Flagstaff, Arizona.

American astronomer Clyde Tombaugh, the person who first spied Pluto in photographs captured at Lowell, urged the director of the observatory, Vesto M. Slipher, to suggest a name before someone else did.

And suggestions did indeed soon pour in from all quarters; the seemingly endless list of nominated names included Cronus, Odin, Persephone, Erebus, Atlas, Prometheus and Minerva. One young couple even wrote to Tombaugh asking that the planet be named after their newborn child.

But it was an 11-year old English girl by the name of Venetia Burney who first suggested "Pluto," during breakfast with her mother and her grandfather, Falconer Madan, Librarian of the Bodleian Library of the University of Oxford.

"My grandfather wondered what it should be called," Venetia recalled in "Naming Pluto," a 2008 documentary. "We all wondered, and then I said, 'Why not call it Pluto?' And the whole thing stemmed from that."

Mr. Madan passed the idea along to his friend Herbert Hall Turner, professor of astronomy at Oxford. Mr. Turner immediately fired off a telegram to Flagstaff:

Scientists at the Lowell Observatory voted unanimously for Pluto, partly because its first two letters could also be interpreted as an homage to Percival Lowell, and on May 24, 1930, the new planet received its official name. In addition, Slipher suggested interlocking the letters "P" and "L" as the official symbol for Pluto.

The name was well received. Walt Disney used it for Mickey Mouse's dog, and it provided the name for Element 94 in the periodic table, plutonium, which was first identified in 1941.

Venetia Phair, as she became known after her marriage, died April 30, 2009, in her home in Banstead, in the county of Surrey, England. She was 90 years old. But her legacy, and her name, live on: In 1987, the asteroid 6235 Burney was named in Venetia's honor, as was a dust-measuring instrument on board NASA's New Horizons spacecraft, which performed the first-ever flyby of Pluto on July 14, 2015. [Destination Pluto: NASA's New Horizons Mission in Pictures]

Interestingly, at about the same time that Venetia named Pluto, another youngster used his imagination and knowledge of the night sky to come up with the design of a flag that would be adopted by a U.S. state.

If you step outside around midnight this week, you'll find the Big Dipper — arguably the leading star group in our hemisphere of the sky — almost directly overhead. The two outer stars of the Dipper's bowl, Dubhe and Merak, appear to point almost directly to Polaris, the North Star. And today, this is the stellar configuration that is rendered on the flag of Alaska, the largest U.S. state.

It was a 13-year-old schoolboy from a small village on the south shore of the Alaska Peninsula, Benny Benson, who suggested the design, via an American Legion contest in 1926. (Alaska was a territory, not a state, at the time.) Accompanying the winning entry was Benson's explanation:

"The blue field is for the Alaska sky and the forget-me-not, an Alaska flower. The North Star is for the future state of Alaska, the most northerly of the Union. The Dipper is for the Great Bear, symbolizing strength."

By May of 1927, the flag design was unanimously adopted by the two houses of the Alaskan territorial legislature. The flag was flown for the first time on July 9, 1927; during the ceremony in Seward, Benny got a watch emblazoned with the flag's emblem, as well as a $1,000 educational scholarship, according to a brief biography published on the University of Alaska's website.

"Since the year 1927 was only four years after Native Alaskans received citizenship and the right to vote, this event became a source of great pride to native Alaskans," the biography reads. "Natives throughout the state hailed Benny as a hero for winning the contest."