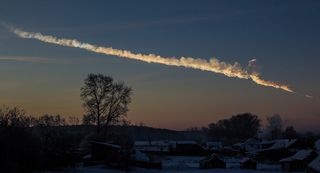 Trail left by the object that exploded over the Russian city of Chelyabinsk in February 2013.
(Image: © Alex Alishevskikh/Flickr, CC BY-SA)

A fireball exploded over the south Atlantic Ocean on Feb. 6 in the most powerful such event since February 2013, when a similar "airburst" injured more than 1,200 people in the Russian city of Chelyabinsk.

Last month's fireball packed the energy equivalent of 13,000 tons (13 kilotons) of TNT, but it exploded in a remote location, so no eyewitness reports are known. (The event was recorded on NASA's Fireball and Bolide Reports page.)

Meteors burn up in Earth's atmosphere every day, but most are small and therefore fly completely under the radar. Fireballs as dramatic as the Feb. 6 event — which was caused by an object estimated to be 16 to 23 feet (5 to 7 meters) wide — occur about once every two to three years, according to Peter Brown, a professor at the University of Western Ontario in Canada and a member of the Western Meteor Physics Group. [Photos: Russian Meteor Explosion of Feb. 15, 2013]

The Feb. 6 fireball, while powerful, would probably not have caused damage even if it had hit Earth over a populated area, Brown added.

"The only way you might get damaged is if rocks hit the ground and you are unlucky enough to be hit by some debris," he told Space.com.

The object that exploded above Chelyabinsk three years ago was about 65 feet (20 m) wide, experts say, and had an estimated explosive energy of 500 kilotons. The blast shattered hundreds of windows; the reported injuries were almost all caused by shards of flying glass.

Meteoroids can come in several different forms. A small percentage of them (perhaps 5 percent) are made of solid iron. Others are more like comets — collections of ice and dust — and still others are rubble piles composed of bits of rock, dust and ice.

If the meteoroid is solid iron and large enough, a fraction of it can survive its trip through Earth's atmosphere and make it all the way to the ground, Brown said. A more loosely-held-together meteoroid, however, will break up in the air.

Both the Chelyabinsk rock and the Feb. 6 object likely came into the atmosphere at a shallow angle of about 20 degrees, subjecting each to relatively little heating and allowing each to penetrate deep into the atmosphere. Both rocks also each exploded at about 19 miles (30 kilometers) above the ground.

A much more powerful airburst took place over the Tunguska region of Siberia on June 30, 1908, flattening about 770 square miles (2,000 square km) of forest.

The best current estimates, Brown said, have the Tunguska object exploding with a force of between 5 and 15 megatons, or about 10 to 30 times the total energy of Chelyabinsk. Experts think the Tunguska meteor was at least 100 feet (30 m) wide, and they believe it detonated about three times closer to the ground than the Chelyabinsk object did — between 4.3 to 6.2 miles (7 to 10 km) above the Siberian treetops. [What If Tunguska Event Happened Over New York City? (Video)]

NASA and other agencies have a robust asteroid-tracking program that can detect objects about 16 to 32 feet (5 to 10 m) wide depending on their proximity to Earth, lighting conditions and other factors.

The main observatories for this work, Brown said, are the University of Arizona's Catalina Sky Survey and the University of Hawaii's Pan-STARRS (Panoramic Survey Telescope & Rapid Response System). Catalina found both 2008 TC3 and 2014 AA. Both Catalina and Pan-STARRS are continually improving their capabilities and will likely be able to detect more objects of this type in the coming years, he said.

Also coming online in the next few months the University of Hawaii's Asteroid Terrestrial-impact Last Alert System (ATLAS). This asteroid-detection system is optimized to pick up meteoroids impacting Earth, and will scan the sky a couple of times a night in search of them. The aim is to give a few days' or weeks' notice ahead of an impact.

But such tracking efforts are concerned primarily with big, potentially dangerous objects, not small fry like the one that caused the Feb. 6 airburst.

"They are too hard to detect ahead of impacting Earth’s atmosphere, and almost never do any damage — Chelyabinsk being a notable exception," Lindley Johnson, lead program executive at NASA's newly created Planetary Defense Coordination Office (PDCO), told Space.com via email.

"This size object hit and no one noticed," Johnson added, referring to the Feb. 6 rock. "Except we in the NASA PDCO did and put it on our fireball reports page, and that’s why everyone now knows about it."