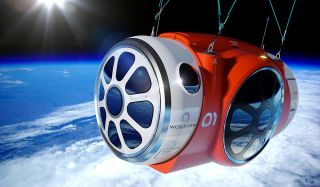 A "spy" turns to science, space rocks are spotted in Florida. and aliens will not be getting a record deal. These are Space.com's top stories of the week.

Spy sat comes back — for science

NASA has approved its next major observatory: the agency will turn an old spy satellite spaceward to probe the universe with near-infrared light. The project, known as the Wide Field Infrared Survey Telescope, should launch in the mid-2020s. [Full Story: NASA Will Use Repurposed Spy Telescope for Wide-Sky Survey]

The mysterious "music" heard by astronauts orbiting the moon on the Apollo 10 mission in 1969 was not as alien as a new Science Channel episode trailer suggests: Simple radio feedback can adequately explain the strange whistling. [Full Story: 'Music' Heard by Apollo 10 Astronauts at the Moon Not from Aliens]

Lasers lead the way to space

Researchers suggest that a laser-powered "photon propulsion" system called DEEP-IN could propel robotic spacecraft to Mars within just three days (and a crewed spacecraft might take about a month). The craft would move forward by sailing on a laser light shined from Earth orbit. [Full Story: Powerful Laser Could Blast Spacecraft to Mars in 3 Days (Video)]

NASA's Cassini probe has been observing Saturn for more than a decade, and a new paper puts those observations to use narrowing down the proposed Planet Nine's possible location. [Full Story: Find Planet Nine! NASA's Saturn Probe Helps with the Hunt]

A new proposal suggests sending a single, palm-size satellite known as a cubesat into orbit to pin its focus on a particular star and search for orbiting planets direct imaging would miss. [Full story: Palm-Size Satellites Could Hunt for New Alien Worlds]

SpaceX was forced to call off their Falcon 9 launch two days in a row due to issues with loading propellant onto the rocket, the company said. When Falcon 9 finally launches, the company plans to attempt landing the rocket's first stage on an autonomous ship at sea. [Full Story: SpaceX Scrubs Satellite Launch, Rocket Landing Attempt]

For the first time, astronomers have pinpointed the distant location of a mysterious explosion known as a fast radio burst. By measuring how the radio waves changed en route to Earth, researchers can use this information to improve their models of dark matter. [Full Story: Dark Matter Clue: Strange Radio Bursts Finally Reveal Host Galaxy]

Look before you redirect (asteroids)

Latest but not last

The new documentary "The Last Man on the Moon," out Feb. 26, tells the story of early spaceflight and the Apollo missions through the recollections of Gene Cernan, the most recent astronaut to set foot on the lunar surface. The documentary focuses on bringing the story of the Apollo program into the present, with special emphasis on how the program has shaped Cernan's life. [Full Story: 'Last Man on the Moon' Documentary Brings Space Exploration Home]