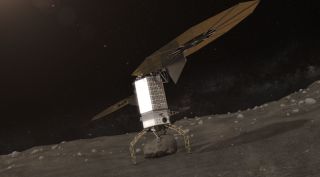 A new report concluded the current target asteroid for NASA's Asteroid Redirect Mission likely has at least several hundred boulders in the range of sizes required by the mission to grab and return to cislunar space.
(Image: © NASA)

LANCASTER, Calif. — A report released by NASA Feb. 18 found no scientific showstoppers for the agency's planned Asteroid Redirect Mission (ARM), but suggested a precursor mission to the selected asteroid could improve the odds of success.

The 21-member Formulation Assessment and Support Team (FAST) was chartered by NASA last fall to examine scientific issues involved with the mission to support development of its first element, a robotic spacecraft called the Asteroid Redirect Robotic Mission (ARRM). That spacecraft will travel to a near Earth asteroid, grab a boulder from its surface, and return it to cislunar space.

The FAST report examined several topics, with a particular focus on 2008 EV5, the asteroid serving as the notional target of the mission. Those analyses included the presence of boulders on the asteroid's surface, the strength of the boulders and their cohesion with the surface. It also addressed issues with bringing the boulder back to cislunar space and safety issues for future crewed missions to the recovered boulder. [NASA's Asteroid Redirect Robotic Mission in Pictures]

One example is whether 2008 EV5 has boulders a few meters across, the range of sizes NASA is planning to grab from its surface. Although there are no detailed images of the asteroid, radar observations have detected several larger boulders. Based on size distributions seen on the surface of other asteroids, that suggests there may be at least several hundred boulders two to three meters across on its surface.

"In the size range we're looking at, there's anywhere between 3,000 and 16,000 boulders in the one-to-five meter range, and likely hundreds to low thousands of two-to-three-meter boulders," said Dan Mazanek, a senior space systems engineer at NASA's Langley Research Center who led the FAST study, during a Jan. 28 presentation about the draft version of their report at a meeting of the Small Bodies Assessment Group (SBAG) in California.

That assessment only applies to 2008 EV5, but NASA is increasingly suggesting that this asteroid will remain the likely target for ARM even as searches for additional candidate asteroids continue. "We do not envision changing this target unless something comes up that is of more interest," said Michele Gates, NASA ARM program director, during a separate presentation at the SBAG meeting.

The FAST report said that the limited information available about 2008 EV5 should be studied in more detail to better understand mission risks. Additional data could be collected with telescope observations, including infrared data from the Spitzer Space Telescope, but the report also suggested a robotic precursor mission could be warranted.

"A precursor to the ARRM target body in order to scout for boulders and provide surface and boulder physical characteristics would effectively increase the characterization phase duration and should be investigated further," the report stated. That precursor could be flown before the launch of ARRM, or launched at the same time and sent ahead as a scout.

"Any potential that we have for characterization should be investigated further," Mazanek said at the SBAG meeting, briefly discussing the rationale for a precursor mission.

Gates, though, distanced NASA from the FAST report's suggestion for a precursor. "These are unfiltered feedback from the FAST," she said.

One outside comment included in the report endorsed additional study of a precursor mission. "This architecture would essentially zero the risk of not finding an appropriate boulder when the ARRM spacecraft arrives," said Laszlo Kestay of the U.S. Geological Survey's Astrogeology Science Center. "We strongly encourage a more thorough cost-benefit analysis of splitting the ARRM, taking into consideration the possibility of schedule slips" for the later crewed mission.

However, during a Feb. 9 conference call with reporters to discuss NASA's fiscal year 2017 budget request, NASA Chief Financial Officer David Radzanowski said NASA was now looking at "roughly 2023" for the launch of ARRM, based on the request of $66.7 million for ARRM in 2017 and projected future spending levels.

He stressed later in the call that the 2023 date was "notional" and could change. "It could be earlier than that, based on what we get in the outyears," he said. "Don't get fixated that there's a delay on ARRM at this point in time. The 2017 request supports a robotic mission in the early 2020s."