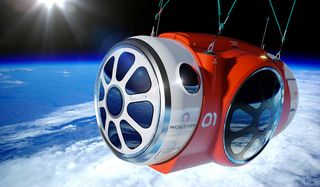 A company that plans to send paying customers high into the stratosphere beneath a giant balloon has just added another former NASA astronaut to the fold.

Arizona-based World View Enterprises, which aims to begin crewed operational flights by the end of 2017, has tapped Ron Garan as its chief pilot, the company announced today (Feb. 23).

"The name of the company is 'World View' for a reason," said Garan, who flew on the 2008 STS-124 mission of the space shuttle Discovery and spent six months aboard the International Space Station in 2011. [World View's Near-Space Balloon Rides in Pictures]

"They share a belief that I have — that seeing the planet from the vantage point that you'll be able to see on a World View flight can be transformative," Garan told Space.com. "And the more people that I think get that experience, the better off the world will be."

This idea is indeed close to Garan's heart; he expanded on it in his 2015 book "The Orbital Perspective: Lessons in Seeing the Big Picture from a Journey of 71 Million Miles" (Berrett-Koehler Publishers). The title refers to the distance Garan traveled during his two space missions, when he circled Earth a total of 2,842 times.

Former astronaut Mark Kelly — who flew on four space shuttle missions during his NASA career, including STS-124 with Garan — already serves as World View's director of flight crew operations, overseeing missions in a big-picture sense. Garan, meanwhile, will focus on the piloting of individual flights.

"We work very well together, and I see that continuing on," Garan said.

World View will take passengers to an altitude of 100,000 feet (30,000 meters) in a pressurized capsule, allowing them to see the curvature of the Earth against the blackness of space during a gentle ride that will last 5 to 6 hours from liftoff to touchdown.

"You're going to have a lot of time to take this all in," Garan said.

The passenger capsule will be borne aloft by a giant balloon, and it will land on wheels after a gliding descent beneath a steerable, parachutelike "parafoil." Tickets currently sell for $75,000.

World View has already flown scientific payloads on uncrewed commercial flights, and it has successfully tested a 10-percent-scale version of its crewed system on a flight to the stratosphere. A full-scale test flight to high altitude should be coming soon, company representatives have said.

World View isn't the only company developing a flight system for space tourism. For example, Virgin Galactic and XCOR are developing suborbital space planes known as SpaceShipTwo and Lynx, respectively, that will allow passengers to experience a few minutes of weightlessness, along with great views.

Tickets to ride SpaceShipTwo are now selling for $250,000, while a seat aboard Lynx will set you back $150,000. A typical SpaceShipTwo flight will last about 2.5 hours from liftoff to touchdown, while Lynx will be aloft for about an hour.