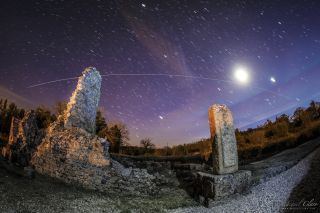 The International Space Station flies over the Roman city of Ammaia in this image taken by astrophotographer Miguel Claro in the summer of 2015.
(Image: © Miguel Claro/www.miguelclaro.com)

The International Space Station flies over the ancient Roman city of Ammaia (in modern day Portugal) in this stunning skywatcher image.

This image was taken by astrophotographer Miguel Claro in the summer of 2015. Claro took the image at "one of the remaining ruins from the Southern Gate Tower of the Roman City of Ammaia," he told Space.com in an email. "At the right side of the moon it is visible the planet Venus."

The International Space Station is a microgravity laboratory and a facility for astronomical, environmental and geological research.  The station flies at an average altitude of 248 miles (400 kilometers) above Earth. It circles the globe every 90 minutes at a speed of about 17,500 mph (28,000 km/h).

The space station is about the size of a football field (measured end to end) and can be easily seen from the Earth with the unaided eye if you know when and where to look. You can used our Satellite Tracker widget here, powered by N2YO.com, to see when the space station and other satellites and spacecraft might be visible from your location.

Ammaia was a bustling Roman town during the first century B.C. Excavations in the area reveal a town that included running water, a forum, baths, a bridge over the river Sever, as well as monumental gates. Nobility from the region had access to imported luxury goods, fine jewelry and marble. Many items from the ancient region are in collections at museums across the world.