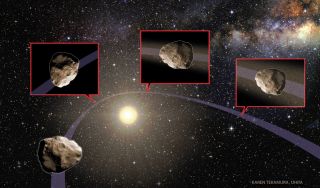 An artist's illustration shows an asteroid disintegrating while in orbit around the sun.
(Image: © Karen Teramura, UH IfA.)

Near-Earth asteroids generally die a lingering death in the depths of space rather than plunging into the sun as previously thought, a new study suggests.

Researchers studied the properties of nearly 9,000 near-Earth objects (NEOs) — asteroids and other bodies that come within 1.3 Earth-sun distances of our planet — to build a model of the overall NEO population.

This model seemed to have a problem, however: It predicted that astronomers should be seeing 10 times more NEOs that closely approach the sun — come within 9 million miles (15 million kilometers) or so of the star — than they actually observe. [Potentially Dangerous Asteroids (Images)]

The research team spent a year puzzling over this outcome before coming to a surprising conclusion: The missing NEOs are actually being destroyed as they get close to the sun, but long before they actually dive into the star.

"The discovery that asteroids must be breaking up when they approach too close to the sun was surprising, and that's why we spent so much time verifying our calculations," study co-author Robert Jedicke, of the University of Hawaii Institute for Astronomy, said in a statement.

The team's work should help scientists better understand the NEO population in a variety of ways. For example, many meteors that light up Earth's night skies are pieces of debris shed by parent NEOs on their laps around the sun. Such debris clouds travel on the same orbits as their parent bodies, but astronomers generally have trouble finding these NEOs. The new study suggests that this is because the parent objects have already been destroyed, the researchers said.

In addition, study team members determined that darker NEOs die farther from the sun than brighter ones do, which helps explain something astronomers already knew: Asteroids that approach the sun closely tend to be quite bright.

This finding implies that dark and bright asteroids may differ significantly in structure and composition, the researchers said.

"Perhaps the most intriguing outcome of this study is that it is now possible to test models of asteroid interiors simply by keeping track of their orbits and sizes," lead author Mikael Granvik, of the University of Helsinki in Finland, said in the same statement. "This is truly remarkable and was completely unexpected when we first started constructing the new NEO model."

Granvik and his colleagues built their model by studying nearly 100,000 images of NEOs acquired by the Catalina Sky Survey in Arizona over an eight-year period.

To date, scientists have identified and tracked almost 14,000 NEOs, but the overall population is thought to number in the millions. Astronomers think that most of these bodies begin their lives in the main asteroid belt between Mars and Jupiter, and then veer inward after experiencing gravitational nudges by Jupiter and/or Saturn.

The new study was published online today (Feb. 17) in the journal Nature.