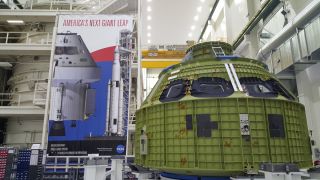 The crew module for NASA's Orion capsule, as seen at the agency's Kennedy Space Center in Florida on Feb. 3, 2016.
(Image: © Amy Thompson/Space.com)

CAPE CANAVERAL, Fla. — NASA's Orion crew capsule is one step closer to its next flight.

The crew module of Orion, which is scheduled to fly around the moon on a 2018 test flight, arrived at NASA's Kennedy Space Center (KSC) in Florida this week.

The Super Guppy touched down at KSC's space shuttle landing facility on Monday (Feb. 1). The Orion crew module was then unloaded and transported to a high bay inside the Neil Armstrong Operations and Checkout (O&C) Building, where it was secured onto an upgraded version of a test stand known as the birdcage.

Further construction activities and a variety of tests will be performed at KSC and NASA's Glenn Research Center in Ohio before Orion blasts off in late 2018 on an uncrewed, three-week test flight to the moon and back, called Exploration Mission 1 (EM-1).

EM-1 will be the first joint flight of Orion and NASA's huge Space Launch System (SLS) rocket, which is also in development, and will mark the first time since the Apollo era that a human-rated spacecraft has traveled to deep space, NASA officials have said.

"This mission is pretty exciting to us," Scott Wilson, NASA's Orion production manager, said here at a media event on Wednesday (Feb. 3). "It is the first time we will have the operational human-rated version of Orion on top of the SLS rocket. It's a lot of work, but a very exciting time for us."

Engineers improved the design of the crew module using lessons learned from Orion's first flight, the uncrewed, 4.5-hour Exploration Flight Test 1 (EFT-1) in December 2014. For example, the new module features just seven welds compared to the original's 33, significantly reducing the weight of the vehicle, said representatives of Lockheed Martin, which is building Orion for NASA.

"EFT-1 was a learning experience in a lot of ways — learning how to design, process and build the spacecraft," said Mike Hawes, Orion program manager for Lockheed Martin.

"The next mission is pretty demanding," Hawes added. "We will fly further into space than ever before and will be in space for much longer, about 21 days. Demonstrating what this spacecraft can do will be huge."

Over the next 19 months or so, engineers will outfit Orion with the systems and subsystems necessary for flight, including its heat-shielding thermal protection system, and subject the capsule to a number of tests, to ensure that it's ready for flight.

"Coming up, we have a pressure test of this vehicle in a couple of months, then integration of propulsion systems over this summer," Hawes said. "In about a year from now, we will be powering on the spacecraft.""It's a multicenter and an international process to build Orion," said Mark Geyer, deputy director of NASA's Johnson Space Center in Houston. "The European Space Agency is building the service module for this mission. It's at [NASA Glenn's] Plum Brook facility right now, being integrated with the components from Lockheed Martin."