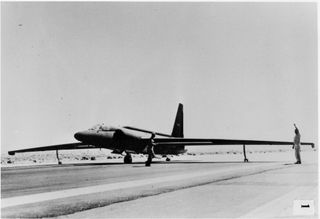 High-flying spy planes such as the U-2, seen here, likely spurred many reported UFO sightings over the years, CIA officials have said.
(Image: © National Security Archive)

In 1947, New Mexico police officer Lonnie Zamora was chasing a speeding car when he heard a loud noise. He saw a flame shoot up in a nearby patch of desert and went over to investigate, thinking a dynamite shack in the area might have exploded.

What Zamora reported is still under intense dispute decades later. He says he saw a sedan-size, shiny object on a hilltop. Once he got closer on foot, the object began making loud noises. Zamora backed away but saw the UFO rise into the sky and speed away until it disappeared.

The UFO sighting — which is still unexplained despite investigators' belief that Zamora told the truth — was investigated by the United States Air Force as a part of Project BLUE BOOK, which recorded 12,618 sightings of strange objects between 1947 and 1969. The Central Intelligence Agency also assisted in analyzing the sightings. [Where to Spot UFOs (Infographic)]

Below are the tips that the CIA learned from "flying saucer intelligence," as the agency highlighted in a recent blog post. Helpfully, the CIA also published a list of UFO cases that Fox Mulder and Dana Scully — the heroes of the recently revived "X-Files" TV series — would enjoy.