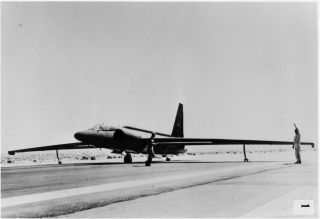 Many of the unidentified flying objects (UFOs) spotted by people in the middle of the last century were actually high-flying spy planes, officials from the U.S. Central Intelligence Agency say.

On Dec. 29, CIA officials said the following via Twitter: "#1 most read on our ‪#Bestof2014list: Reports of unusual activity in the skies in the '50s? It was us."Attached to the tweet was a PDF of "The CIA and the U-2 Program, 1954-1974," a report about the United States' manned U-2 spy plane written by agency historians and published in 1998.

That document notes that "high-altitude testing of the U-2 soon led to an unexpected side effect — a tremendous increase in reports of unidentified flying objects (UFOs)." [Where to Spot 'UFOs' (Infographic)]

"This, in turn, led to the Air Force's Operation Blue Book. Based at Wright-Patterson, the operation collected all reports of UFO sightings," the document states.

Blue Book officials regularly called on the CIA to help investigators eliminate the majority of UFO reports, the document explains, "although they could not reveal to the letter writers the true cause of the UFO sightings."

The CIA tweet has sparked its own UFO flap: Several analysts dispute the CIA assertion that U-2 flights really caused upward of half of UFO sightings.

"One thing this CIA UFO claim has accomplished: It has united UFO skeptics and proponents in proclaiming it untrue," Robert Sheaffer, author and well-known UFO cynic, wrote in a blog post last week. "We might agree on little else, except that this claim is nonsense."

Sheaffer explains that the Project Blue Book files are now public records, allowing anyone to verify when and where sightings were reported.

"The bottom line is: There is absolutely no correlation between the times and places of UFO reports and U-2 flights," he wrote.

A similar view about the CIA assertion is held by UFO photo analyst Bruce Maccabee, who analyzed the data and concluded that the CIA's explanation is "preposterous."

The statistics "do not bear out the claim that there was a large increase in sightings by any segment of the population, pilots and air traffic controllers included, once the U-2 aircraft started flying," Maccabee wrote in a recent blog post.

The U-2 is still flying all these years later, despite advances in robotic aircraft technology that have led to the deployment of surveillance drones such as the United States' Global Hawk.

Leonard David has been reporting on the space industry for more than five decades. He is former director of research for the National Commission on Space and is co-author of Buzz Aldrin's 2013 book, "Mission to Mars — My Vision for Space Exploration," published by National Geographic with a new updated paperback version to be released this May. Follow us @Spacedotcom, Facebook or Google+. Originally published on Space.com.